The scope and reach of community programs supported by Dunkin’ Donuts franchisees is as impressive as it is impactful. The Dunkin’ Donuts & Baskin-Robbins Community Foundation, which this summer announced another $205,300 in grants to support organizations in the mid-Atlantic region, has helped to raise more than $1 million for non-profits throughout New York, New Jersey, Pennsylvania, Delaware and Maryland. Similar numbers are reported in other parts of the country as well.

The specific programs which generate such funds are planned and executed by the franchisees, who enthusiastically dive in to give back to their communities in a big way.

One such success story is the Dunkin’ Donuts George Mandell Memorial Golf Tournament held at the International Golf Club in Bolton, Massachusetts every summer. October 2013 marked the 16th year for the event, drawing 250 participants and raising an impressive $600,000 for the Jimmy Fund. All told, the event has surpassed $10 million in cumulative donations to Dana-Farber since 1998.

“The money raised from the Tournament goes to support the Translational Research Laboratory through the Dunkin’ Donuts ‘Right Treatments Rid Cancer’ Research Fund,” says Melanie King, director of Marketing and Communications at the NDCP. “The lab is an important part of Dana Farber’s balanced commitment to patient care and research because it is focused on ensuring that scientific advances are translated to new therapies as quickly as possible.”

When George Mandell, a franchise pioneer and inaugural inductee in the DDIFO Franchise Owners Hall of Fame, lost his battle with cancer in 1998, New England franchise owners stepped in to create the tournament. Each year, the event pays tribute to members of the Dunkin Donuts community impacted by cancer.

A fun and attention-grabbing visual can also come into play when franchisees organize community fundraisers. The national “Cops on Rooftops” events enjoy incredible popularity, drawing donations for the Special Olympics in markets such as greater Baltimore, Chicago, and Milwaukee, to name a few. For this unique initiative, police officers are literally stationed on the roofs of Dunkin’ Donuts stores, where they solicit donations to bring them down. While some officers are content to smile and wave, others have been known to dance, show up in costume, and even toss munchkins down to customers.

“Cops on Rooftops” has become a popular fundraising effort for Special Olympics in several states. The initiative is coordinated through the Dunkin’ Donuts & Baskin-Robbins Community Foundation, which has raised over $4 million for community causes since its launch in 2006.
Photo Credits: Special Olympics Illinois

Occasionally, adjustments need to be made, such as this past summer when heat indexes in the triple digits forced officers in Onondaga County, New York to come down from the rooftops and fundraise inside, but public response is still strong. Locations who participate generally report proceeds in the thousands from the event, providing a huge boost for participating local athletes.

In the New York City area, franchisee Rod Valencia says the feedback and consistent support his stores receive from the community shows the success of their charitable initiatives.

“There is tremendous positive response from our guests within the areas in which we operate,” says Valencia, who owns stores in four boroughs of New York City as well as in Tampa. “They show their appreciation by making it known to their friends which Dunkin’ Donuts store they patronize.”

Programs which run in Valencia’s locations include sponsorship of youth sports events, projects created in conjunction with Habitat for Humanity, and partnerships with local school districts.

“Once a year, we have a class of students come to our CML location to experience how donuts are made and to practice finishing them,” he says. “For Habitat, we were able to work closely with communities on disaster relief efforts in our area.”

“We’ve been doing it for five years now, and 100 percent of the proceeds go to the Foundation,” says Rando. “Since they are a music based organization, we have some really great live performances.”

In 2012, performers and guests included American Idol finalist Colton Dixon and Disney television star Coco Jones. For a special ticket price, Family Day attendees can upgrade their admission to include a VIP reception, where they can meet the day’s performers.

In addition to their major annual event, Rando’s stores are known for being strong supporters of local youth sports programs.

“I have three kids who all grew up through the programs here, and I’ve always been active on those Boards,” he says, adding that local sporting events truly bring the community together in his market. “You look at youth soccer in Williamson County, and there are 4200 kids in the league every fall. There are fourteen fields going on any given Saturday.”

It is that link between Dunkin’ Donuts franchisees, employees, and community members that spells success for a host of charitable initiatives. In the Northeast, efforts large and small are supported equally.

“Our number one cause is the American Red Cross,” says Colleen Bailey, who owns eight stores in central Maine. “We also support Relay for Life and various programs in local schools. For one location, we donated $1000 toward a playground committee.” 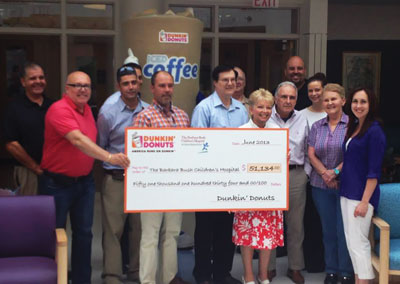 “Customers love it, which brings in more people with more needs, but that’s okay,” she says. “Sometimes it’s an individual looking for help with a fundraiser for someone’s medical bills. We try to help anyone who comes in as best we can.”

Bailey is also chair of the Dunkin’ Donuts & Baskin-Robbins Community Foundation’s Maine Chapter – which works in conjunction with Dunkin’ Brands – and is proud of the work she and other area franchisees do for the state as a whole.

“The Foundation chooses projects based on three pillars: safety for the community, health for the children, and food for the hungry,” she says.

One such campaign recently raised $51,000 for the Barbara Bush Children’s Hospital in Portland, Maine. In 2012, the Foundation’s Northeast Chapter granted over $300,000 to the Jimmy Fund, Hasbro Children’s Hospital, Northeast Food Banks, and the Alzheimer’s Association.

Whether making sure the local little league has quality equipment or supporting critical organizations with the financial and community support they need, Dunkin’ Donuts franchisees consistently step up to the plate, representing a source of great pride for the company.