Ask New Hampshire Dunkin’ Donuts franchise owner Carl Andrade about Girls Inc., a local nonprofit that helps girls achieve their personal best, and he will have to fight off the tears. For the past decade, the organization has been close to Andrade’s heart.

“Some girls are from single parents and some are from drug addicts,” says Andrade, who owns 16 Dunkin’ Donuts stores all in New Hampshire. “If it weren’t for this program, most of these kids wouldn’t even have a meal.”

His commitment to philanthropy started when he opened his first Dunkin’ in 1977.

“The first places in close proximity to our stores that called us got our help,” Andrade recalls. “We started by sponsoring kids’ teams with our logos on their uniforms.”

Today, the organization continues its support of the Bedford School District as well as the state’s Safe Sports program and the Cystic Fibrosis Foundation.

“My wife’s cousin’s son was born with CF, so I rode 77 miles for CF, without ever haven ridden before, to recruit franchisees from New Hampshire to Maine,” says Andrade, who recalls specifically his family’s fundraising strategy: “We sold paper sneakers for $1.”

Andrade demonstrates that he cares about people in many ways, supporting several initiatives in his community. He recalls one occasion when tragedy struck and he was compelled to step in and assist one of his employees.

“Both parents of an employee died within a week of a rare influenza. We did a fundraiser [where] a $5 donation got you a chance to win free coffee for one year. We raised $20,000 in seven days.” Andrade refers to his efforts as “just caring about people.”

When Andrade got involved with Girls Inc., he wanted to host a grand holiday party for the girls, complete with gifts and a holiday dinner. So, he donated $5,000 to pay for the affair, but that wasn’t all. Andrade also committed to donating $5,000 every year for a similar holiday party. And, since transportation is not available for all the girls in the program, Andrade and a group of other New Hampshire franchisees chipped in to purchase a bus for the program. “Without it, the kids couldn’t get there,” he says.

Then Andrade went one giant step further, providing the cash to help the Manchester chapter of Girls Inc. pay off their $150,000 mortgage and ease the nonprofit’s debt load.

“I want to give something back,” says Andrade. “We’re here doing business and appreciate being here. The more [you are] involved in the community, the more you learn about what’s going on.”

His advice to other franchisees: “You don’t have to pay off a building, but you can do a lot for $3,000 to $5,000 per year and keep it local where it’s much more appreciated.” In turn, he says, “They will want to help your business because you’re helping the community.” 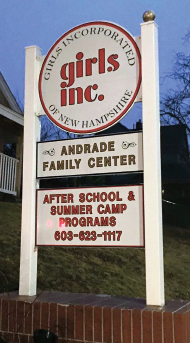