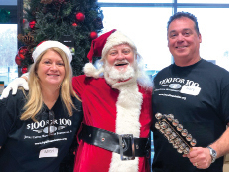 For Mitzi Lawlor, community involvement is more than a commitment: it’s a family tradition.

Her parents, Helen and Ralph D’Alelio, bought their first Dunkin’ Donuts store in Massachusetts in 1977. For the next 30 years they used their business to improve the lives of those living in the area, particularly children.

“My mother always gave back to the community,” says Lawlor. “She was so involved in the (Dunkin’) business.”

Ralph just passed away at the end of 2017; Helen died in 2007, but Lawlor and her two brothers have taken up the reins to continue her legacy. They established a foundation in her name, the Helen D’Alelio Family Foundation, through which they give back to the seven communities where they have stores.

“Our communities are what make us successful, and giving back to those communities makes us a part of them,” says Lawlor, who began working in her parents’ store as a teenager. “It’s something personal to me.”

The signature program for the Foundation is “$100 for 100,” where 100 kids in the towns where Lawlor has stores are chosen from among several hundred nominees to receive a $100 gift card. It’s done in partnership with Joyal Capital Management Foundation, the charitable arm of Joyal’s financial management firm.

Lawlor collects the money by setting up canisters for donations instead of tip jars in her stores. The kids, between ages five and eighteen, are nominated by teachers, coaches, neighbors – anyone who knows the child well and can write a compelling reason for them to be chosen.

“They apply, we pick the kids, we have a big function,” Lawlor says. “We do it around the holidays, in the spirit of giving.”

This year that function was at Dick’s Sporting Goods in Saugus, Mass. During the event, the kids come in, get their $100 gift card, and volunteers help them to find things on sale, such as coats, air mattresses, sneakers or sporting equipment. They can purchase items for themselves, or as gifts for someone else.

“The stories are amazing,” says Lawlor, of the kids who come in for the event. “I ask all my managers to come in and be part of it.”

It’s not the only way Lawlor supports local kids: she also partners with the Chamber of Commerce to offer a scholarship program. They have high school students write essays: if I was an entrepreneur in my town, what would it be and why.

“We have a committee who reads all the essays, and we pick those to get between $500 and $1000,” says Lawlor. “The kids who get the scholarships are great, I love to hear where they’re going to college.”

And then there’s her sponsorship of one child annually to attend a 6-week summer program at the Ron Burton Training Village, which takes boys from challenged lives and puts them through character-building exercises that will give them leadership, educational and social skills.

“We started inviting Paul Burton to our $100 for 100 event, and that spurred them to start their own program,” explains Lawlor. “He usually has a list of boys, and we’ll go through and figure out which kids are really in need from my area.”

Lawlor also sponsors the local football teams and cheerleaders, the After Hours prom party in Medford, Thanksgiving Day at a homeless Center in East Boston, and events at local senior centers. But for the past ten years, one of her favorite events has been the military luncheon Chamber event in Medford.

It takes place right around Patriots Day. The veterans come in and are feted by everyone in the community, down to the mayor and city council. Lawlor walks around to thank the vets for their service and hand out gift cards for free coffee.

“I won’t let anyone else sponsor it,” she says. “My dad was a vet. The first year we did it, we took a picture of him.”

With the legacy Lawlor and her brothers are creating, it’s only fair to ask if her own children will take the mantle when the time comes.