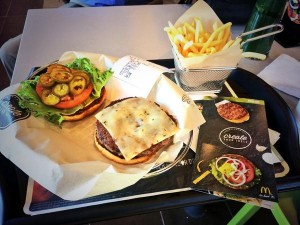 Dunkin’ wasn’t alone in their weak December report – McDonald’s conducted a special investor call, detailing their “build your own taste theme” and more decentralization in corporate functions, to hopefully be more nimble and more local in its business focus. McDonald’s announced its breakfast sales were still positive. McDonald’s will take some time to change.  Starbucks announced US traffic was only +1% in the fall, a 3-4 point decrease from earlier in 2014. CEO Howard Schultz noted weak mall traffic counts. Starbucks followed up with its Investor Day Presentation in December, where they reiterated their food, new store counts, pickup and delivery, and mobile payments themes. They are casting a wide net.  He also released detailed US store data – average weekly sale of $26,900; average transactions per week per store of 3917 and a calculated (higher than expected) ticket of $6.87.  Finally, the Burger King/Tim Horton’s purchase concluded.  The Tim’s CEO has been routed to special projects and the CFO left, while the Burger King CEO is enroute to Canada to take over operational control.  There is acknowledgement that the Tim’s Canadian franchisees “are concerned”.