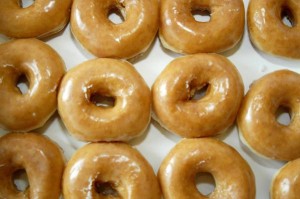 Krispy Kreme announced this week that it is expanding its stock repurchase program by investing an additional $25 million in the effort bringing the program total to $105 million.  The stock repurchase initiative is designed to reduce the number of shares the company has outstanding, thereby raising the value of the remaining shares.  As of the beginning of August, the company recognized some 63 million shares as outstanding.  Also this week, McDonalds applied for trademark protection on the word “McBrunch” seemingly indicating that the Golden Arches will be looking to boost sagging sales with a new focus on extended breakfast hours overlapping with their normal lunch hours.  And lastly, we noted that Fortune released its list of the top 100 fastest growing companies this week and that Keurig was pegged at 48.  To be considered, companies must meet certain criteria including revenue or net income for the four quarters ended on April 30, 2014 of at least $50 million and $10 million respectively.  They are ranked on revenue growth rate, e.p.s. growth rate and three-year annualized total return for the period ended June 30.