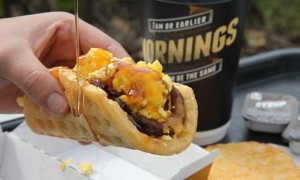 We haven’t reported too much of late on our competitors, but there is much to report, so we’ll try to catch you up in this issue . . . Taco Bell has joined the breakfast competition, announcing a few weeks ago that beginning March 27, they will offer a rather extensive breakfast menu from 7AM to 11AM.  Starbucks has announced the launch of four new breakfast sandwiches beginning this week.  The additions include Ham & Swiss, Vegetable, Egg & Cheddar and Turkey Bacon and Egg White melt sandwiches.  McDonalds has increased its focus on the breakfast segment with a renewed concentration on coffee sales and the testing of “Petite Pastries” in the San Diego market.  Green Mountain Coffee Roasters has now officially changed their corporate name.  To capitalize on the popularity of their Keurig single brewing system, they are now known as Keurig Green Mountain.  Krispy Kreme delivered good Q4 and 2013 operating results with same store sales up 6.7% and 9.9% for domestic franchisees, exceeding that of both Dunkin’ and Starbucks.  They have new SDAs signed in Southern California (20 units), Houston (10 units) and another SDA for Alaska.  They speculate the new small factory store format could do $30,000/week in sales, but it retains a heavy bakery sales mix and its beverage sales mix is still very low.