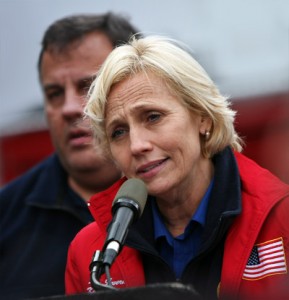 Kim Guadagno is not just the first woman to serve as Lieutenant Governor in the state of New Jersey; she is also the first lieutenant governor since the Colonial Era. Originally from Iowa, Guadagno earned a reputation as a corruption fighter during her years as a United States Attorney, Assistant Attorney General and Deputy Director of the New Jersey’s Division of Criminal Justice.

In 2007, she became the first female sheriff in Monmouth County, which is the fifth most populous county in New Jersey and is located just across the Hudson River from New York City.

New Jersey voters approved a constitutional amendment in 2005 creating the position of lieutenant governor. The first gubernatorial election featuring candidates for governor and lieutenant governor was in 2009 when candidate Chris Christie selected Guadagno as his running mate.

New Jersey’s constitution calls for the lieutenant governor to be appointed head of a cabinet level department – which is determined by the governor. Guadagno serves as New Jersey’s Secretary of State and oversees the state’s economic development efforts. 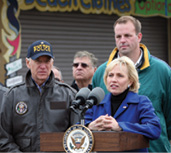 In February, Guadagno kicked off “Show Your Love for the Jersey Shore,” a public-private initiative designed to reinvigorate tourist activity in the region decimated by Hurricane Sandy.

“Tourism is a critical economic engine for New Jersey, particularly along our shore. It is an industry that contributes significantly to the health of our communities by creating jobs and bringing revenue into our shore towns,” Guadagno said. “I encourage residents and visitors to ‘Show Your Love for the Jersey Shore’ by supporting local shore area businesses through Valentine’s Day and the months ahead. Through this initiative, we will continue to demonstrate support for local businesses recovering from Sandy and show that the Jersey Shore is still a great place to have fun and create memories.”