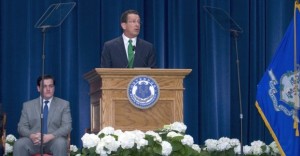 On a 7-3 vote this week, the Connecticut General Assembly’s Labor and Public Employee Committee released HB 5069 with a favorable report to the House Floor.  The bill provides that any employer with 500 or more employees or “any franchisor whose franchisees, collectively, directly employ at least five hundred employees in the state” and does not pay the “standard rate of covered wages” will be fined $1 for each hour worked by each such employee!  The bill is now in the Legislative Commissioner’s Office from which it will be referred to another committee (possibly the Judiciary Committee) for further deliberation.  The state’s minimum wage, currently the highest in the nation, is $9/hour, but the “standard rate of covered wages” is statutorily pegged at 130% of the minimum wage, or $11.31 – so, the minimum wage isn’t the minimum!  Notwithstanding, Governor Dannel Malloy continues pushing strongly to increase the minimum (and thereby, the standard rate of covered wages) again!