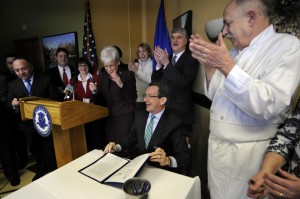 Notwithstanding that it had recently increased the minimum wage across the Nutmeg State, thereby keeping it the highest minimum wage in the nation, Connecticut didn’t think that was good enough when President Obama visited Central Connecticut State University a few weeks back.  Seems the President no sooner left when the legislature passed another increase in the state’s minimum wage.  Governor Dannel Malloy, who had been pushing for the President’s proposed increase signed the bill into law last week.  On top of being the first state to mandate paid sick leave for all employees, Connecticut is now also the first state to hike its minimum up to the $10.10 wage that Obama has been pushing.