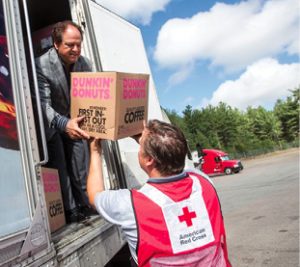 Carlos Andrade is shown offloading supplies to the Red Cross in this photo from Dunkin’ Brands.

First Harvey, and then Irma. When these two hurricanes made landfall in the continental U.S. this fall, it marked the first time in recorded history two Category 4 storms landed in the same season. This has been one of the most active seasons on record. (Hurricane season officially ends Nov 30.)

Harvey ravaged Houston and the Gulf Coast; Irma slammed Florida, and devastated the Caribbean. The size and scope of these two hurricanes – which pounded the states within two weeks of each other – affected everything from energy refineries and airlines to hoteliers and freight. Moody’s Analytics estimates damage from Irma and Harvey at close to $200 billion; the economy may have suffered another $20 billion to $30 billion in lost output. For small business owners, the impact from these storms has been particularly severe.

“It certainly was a disaster,” says Shaw Darwish, who is still reeling from Harvey’s impact in Houston. Darwish owns two Baskin Robbin shops in the Houston Metro. Even before Harvey hit, Darwish decided to close before the storm’s arrival. He remained closed for three days before getting one of his shops open in the wake of the storm. He says he sustained significant flood damage, estimated at $300,000 and lost approximately $10,000 in sales. Harvey’s relentless rainfall, as much as 50 inches in two days, flooded sections of the city that had been spared significant damage from prior hurricanes.

Harvey was Darwish’s third hurricane, but it was absolutely the worst. When roads became impassable, his people had to hunker down. Even as rain water was falling and flood waters were rising, Darwish was focused first on the safety of his employees and fellow franchisees.

“We stayed in contact and checked on one another, and that provided moral and emotional support,” says Darwish. Once the storm passed, he was able to assess the damage. Once power came back and floodwaters receded, he reopened. Then, as the weather cleared and people began to venture out, Darwish found many were thrilled to have access to the comfort food his Baskin Robbins and Dunkin’ Donuts shops could provide.

Dunkin’ Donuts franchisee David Daly says he felt like he “dodged a bullet” when Irma veered inland rolling over Fort Myers. Daly, who owns 14 restaurants in southwest Florida suffered minimal damage to his restaurants. Signs were blown away and power was knocked out. Daly lost some product from the shelves and sales from the register. 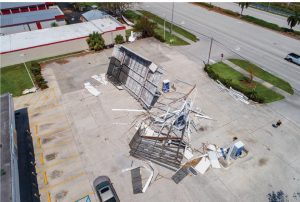 Daly was also spared disaster at the Central Manufacturing Location (CML) he operates, which supplies baked goods to 45 nearby Dunkin’ Donuts shops. The CML’s delivery trucks were parked in a protective location away from the wind and against the building. The facility did lose power, but was able to keep operations running thanks to a gas-powered generator. Before the storm, the CML has stockpiled a week’s worth of product, and as soon as the roads were cleared, deliveries were on their way again.

“When you’re managing a bakery, you know every screw, bolt and nut in the place; there’s a lot of moving pieces in dealing with an emergency, and it’s important to stay on top of it all.”

The biggest disruption, says Daly, was maintaining a work force. An evacuation order scattered his workers everywhere, and it took three to four days before he could assemble even a skeleton crew. But he didn’t want to rush people back to work. Daly took a cautious approach, encouraging everyone to take care of themselves and their families before reporting to work.

“Communication is utmost; I tried to anticipate what could go wrong; make sure I had enough product, and work out personnel needs.” He had a checklist and plan in place, whether it pertained to power interruptions, disrupted communications or transportation challenges. “By the time the hurricane hit, we were as well-organized as we could get, so we hunkered down, then took stock of what damage was done, and got right back to work,” he says.

Not far away, in Tampa, Dunkin’ franchisee Nick Apostoleres nervously watched the storm’s track as well. After whipsawing through the Caribbean Islands, Irma was steering its way towards the Florida Keys. Apostoleres says his workers wanted to seek safe refuge, but the storm wasn’t due to make landfall in Florida for three or four more days and he wasn’t prepared to close down just yet. “It’s tough to balance your responsibilities,” he recalls. Apostoleres closed his shops on Saturday at noon, about 24 hours before Irma was expected to hit.

Almost all of his 15 Tampa stores lost power, one location was vandalized, and three stores remained without power for more than a week. All perishables were lost in those locations, and financially, “you take a pretty big hit on that,” he says.

“When the power finally turns back on, it’s important to have a plan not just for closing but reopening. There’s an awful lot of clean up, whether it’s changing water filters, cleaning up branches and leaves in the parking lot, or cleaning any food lost out of the coolers,” Apostoleres says.

But it was hard to carry out the advanced plans because many of his workers had evacuated the area, seeking safer accommodations for the storm. Others that had stayed behind couldn’t come right back to work because they had to get their homes stabilized. The solution was to spread the employees who were available across the many stores. Many worked extra shifts as necessary to get things back to normal.

Back in Houston, Kitty Wong, who owns two Baskin Robbins, lost all the ice cream in her shops; Harvey kept her businesses shuttered for two weeks. “There was nothing we could do to prepare when the products start melting,” says Wong. Harvey had left a trail of heartache and worry, but like so many of the hurricane victims who survived, Wong kept her priorities straight. The business took a hit, but she noted, “Compared with so many people who lost everything, we are lucky.”