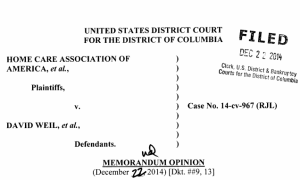 Although it clearly doesn’t impact the QSR industry, we’re certainly pleased to learn that a federal court in Washington DC has struck down portions of a ruling of the Department of Labor mandating minimum wages and overtime pay for certain home health companion workers employed by third party businesses.  The decision will hopefully serve to rein in the Obama administration and their penchant for implementing policies as law even though Congress has not taken action or has expressed an opposing intent. In his ruling, District Court judge Richard Leon admonished the administration citing the rule as “another thinly veiled effort to do through regulation what could not be done through legislation.”