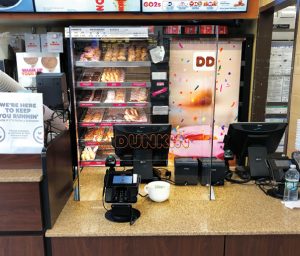 In our lifetimes, we haven’t seen anything quite like the coronavirus pandemic. It is a fast-moving phenomenon that makes it hard to predict what will happen in a day, let alone a week or a month. As the nation shifted into a near quarantine in response to the outbreak, Dunkin’ franchise owners changed the way they did business. Priority No. 1 was making sure employees and customers were safe. After that, they had to figure out how to continue serving beverages, snacks and customer service to essential personnel and others hungering for a donut and coffee. Now, they are again on the brink of something altogether new—reopening in an environment filled with fear and uncertainty.

“No one has a crystal ball, but I would imagine when stores are allowed to open normally, I am thinking there would probably be less seating in stores, and we’d try to distance tables at least six to eight feet apart,” says John Motta, a Dunkin’ franchise owner with nine stores in New Hampshire and 21 in Virginia, who also chairs the development subcommittee for Dunkin’ Brands. “But will people want to sit in lobbies as much as they did before? Maybe we won’t need big lobbies. Will this alter how people use Dunkin’? We don’t know what the future holds.”

Customers drive business. Will they return?

With at least 2,000 Dunkin’ locations in the U.S. having shuttered their lobbies, drive-thru has helped sustain the business. According to Nation’s Restaurant News, “Ninety percent of the chain’s 9,637 domestic locations have remained open.” However, it is anything but business as usual. Mornings have been uncharacteristically quiet, as fewer people venture into the office at that time. Middays have picked up a bit as people who have been working from home venture out for a coffee break. Dine-in service is a thing of the past, but for how long? One of the enduring questions of the pandemic is: When will customers feel safe and confident inside a restaurant?

“It doesn’t matter what the government does to lift the lockdowns,” says Robert Branca, co-chair of the Northeast Regional Advisory Council (RAC), who owns a network of Dunkin’ shops in Massachusetts, New York and Ohio. “It will be consumer behavior that determines when we come back. Do people really want to sit in a restaurant, in a stadium, or go to a gym? And with schools and daycares closed, that will definitely affect the behavior of a large segment of the population.”

Public perception is important. According to an April 2020 poll taken by food industry market research firm DATAassential, people were asked what they would require before feeling safe to eat in restaurant dining rooms. Their responses:

Dunkin’ has already implemented a number of these practices to ensure people who visit and people who work there are safe. These include installing Plexiglas shields at the sales counter, providing employee PPE, requiring employees to increase hand-washing and to view a video about maintaining good hygiene. Digital thermometers are being used to ensure employees with fevers are sent home.

For those franchisees who have kept lobbies open, there are no more tables and chairs. Floor messaging tells take-out customers where to stand in order to enforce social distancing by maintaining the required six foot separation.

With so much focus on take-out service, Dunkin’ updated its app to make online ordering easier for curbside pickup, with enhancements such as identifying the customer’s make and color of vehicle. The app also notes new operating hours, as most franchisees have extended closing hours to enable more thorough cleaning and disinfecting of their restaurants.

Franchisees have closely monitored the Centers for Disease Control and Prevention (CDC) guidelines as well as the guidance coming from Dunkin’ Brands. Both have been especially helpful now that the nation is moving closer to an economic reopening. “I think that franchisees have done the best they can under these circumstances and I think they should all be commended for it, and even more so for the employees, says Tom Daly, a franchisee with ownership in 28 Dunkin’ shops in Massachusetts and Florida and a co-chair of the Southeast RAC.

As of May 1, several states announced plans to restart their economies and provided guidance to business owners that are able to reopen. According to CBS MarketWatch, Florida reopened restaurants at a 25 percent capacity on May 4, though not in Miami-Dade, Broward or Palm Beach counties, where the most cases of Covid-19 have been recorded. Parts of New York State are eyeing a limited reopening in May. Other states, such as Georgia, Alaska, and Tennessee have already opened restaurants with limitations on seating and capacity, though “even in states like Georgia and Tennessee, I do believe the Dunkin’ standard has remained with no seating,” Daly says.

According to the CDC, businesses can reopen after they have implemented safeguards to ensure ongoing employee monitoring. This includes encouraging employees who are sick to stay home; establishing routine and daily employee health checks; monitoring absenteeism and having flexible time off policies; having an action plan if a staff member gets Covid-19; creating and testing emergency communication channels for employees; and establishing communication with state and local health authorities.

Dunkin’ has earned high marks for supporting franchisees during this time. “Communication has been very well planned out,” Daly says, adding “They have collaborated with franchise leadership on almost everything,” including how to provide relief from various business obligations.

During its Q1 earnings call, the company emphasized four guiding principles at the core of its response to the coronavirus pandemic: ensure public safety, provide flexibility, support franchisees and empower quick decision-making. “That’s why we’re doing everything we can as a company to serve the needs of our franchisees, employees and communities during these challenging times,” CEO Dave Hoffmann says. 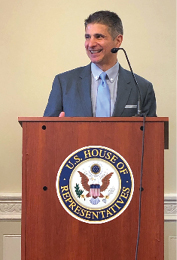 “Going back to mid-March, they’ve deferred all our payments to them to support the liquidity of the franchises,” says Branca. “They’ve stepped right up. Their No. 1 mission has been to support the franchisee’s survivability at the unit level and the support of their employees in each restaurant.”

The company “has been very cooperative for not holding us to contract terms to do remodels this year, because of financial difficulties,” says Motta. “People can do it next year or when things get better.”

In his remarks to investors during the April 30 earnings call, Hoffmann emphasized the partnership between Dunkin’ and its franchisees: “We did what was right for our franchisees to protect their cash flow and preserve their businesses that they built with their families.”

And, as they have throughout this pandemic, franchisees will be faced with new challenges adapting to a world that seemingly changes daily.

“This is new to all of us,” says Branca.