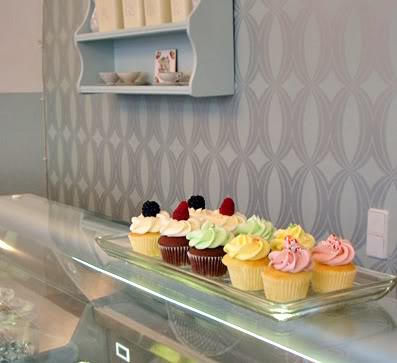 Sage Meehan at Food Fashion Trends traces the popularity of Cupcakes to the TV Show Sex in the City, she writes: Carrie is often seen unabashedly devouring cupcakes from her favorite bakery, “Magnolia” in New York City. Magnolia is one of most well-known bakeries devoted to cupcakes, but certainly not the only one. In the last ten years, bakeries devoted entirely to cupcakes have sprung up on the East and West coasts and every major city in between.

What makes cupcakes so popular? Are they really the perfect dessert? The answer may be in their individual size; small enough to eat by yourself but big enough to satisfy a craving for something sweet. Is it their decoration? They can be plain or fancy, casual or formal, crazy colored or pristine white. Is it because they bring back memories of childhood? The delight of having a cake small enough to fit in tiny hands and not having to share…the peeling off of the wrapper like a little present…and the of eating the frosting first, or not. Perhaps it is the versatility of a plate of cupcakes. Suitable for a midmorning coffee break, afternoon tea or even a wedding reception, cupcakes are always welcome.

Not much is known about the history of cupcakes. There is very little written about when cupcakes came into existence. One of the earliest records comes from the Fanny Merritt Farmer’s Boston Cooking-School Cook Book. In this book the cook is instructed to bake individual cakes in tin cups. Paper liners were not used until just after World War I when the James River Corporation manufactured cupcake liners on machines that a few years before were making artillery shells. Commercial cupcakes reached the market some time before World War II. Hostess introduced the Hostess Cupcake in the 1950’s.

There is even a franchise available: Cupcake Station