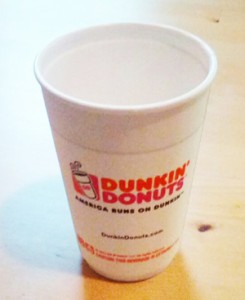 In the wake of California banning polystyrene cups and food containers, we saw a number of cities follow suit: Seattle Washington, Amherst and Brookline in Massachusetts, then Portland Maine considered it but ultimately withdrew the proposal and a host of other cities have been considering a ban.  Now, the nation’s capital has teed up the issue.  Washington, DC Mayor Gray last week proposed the ban on Styrofoam as one part of a legislative package he says will “make the District of Columbia the healthiest, greenest, and most livable city in the United States.”  Aside from the ban on foam packaging, he also submitted a proposal to require DC businesses to provide transit benefits to their minimum wage employees.  Maybe that’s how he means making DC the “greenest” city in the US?