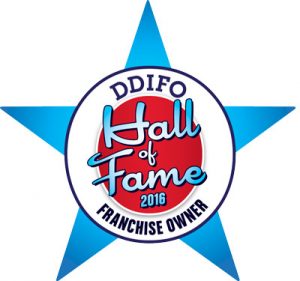 This year, DDIFO is honored to announce the induction of two long time operators into its Franchise Owners Hall of Fame.

Duke Carvalho always had a good eye for business. He saw the money side of it as a manager at the Cambridge (Mass.) Portuguese Credit Union. He saw the operations side of it as part-owner of a hardware store in Cambridge, and he saw the confrontational part of it as a tow-truck driver throughout Greater Boston.

So when, in 1978, Carvalho had the chance to talk with his friend from the local Portuguese community, Tony Couto, over business at the bank, he had his eye on potential opportunity with Couto’s already successful Dunkin’ Donuts business.

Couto had an offer for Carvalho, like he did for so many others that entered the Dunkin’ system in the 1960s and 1970s. “Come work at my store and see if you like it,” Carvalho recalls Couto saying. After he tried it, he liked it. He says Couto later told him, “I know a store for sale and I’ll line it up so you can buy it.”

Carvalho left the bank, sold his share of the hardware store, and the rest is history.

This year, Duke Carvalho will be recognized in the DDIFO Franchise Owners Hall of Fame during the National Conference at Foxwoods Resort Casino.

“It is a true honor to be recognized like this, by all your peers in this community for all your hard work in this business,” says Carvalho.

David Carvalho, who, along with his sister Jessica Moller, now runs the family business, echoes the comment.

“As his son, I am truly proud that he has been chosen by his peers for the Hall of Fame.”

Throughout his time as a Dunkin’ Donuts owner and operator, Carvalho took an active role on several councils and committees, including the Ad Committee, DCP and Leadership Council, on which he served as co-Chair. He is a past recipient of the Dunkin’ President’s Club Award, the Combo-Operator of the Year Award, and the Irv Robins and Burt Baskin Award for Superior Innovation 1999. He was also part of the leadership of DDIFO, serving as Treasurer in 1981 and Chairman some years later.

In a 2013 interview commemorating DDIFO’s 25th anniversary, Carvalho said of the association, “DDIFO played a role in reaching new levels of growth. It helped give franchisees sense of direction that the group spoke on their behalf. A lot of stuff we did was not public, but it led us to our goal of protecting franchisees.”

All these years later, he is being recognized for his commitment, his hard work and his eye for business.

David Carvalho says his dad was always a pioneer in the business.

He recalls how Carvalho was among the first to sign up to test new point-of-sale computerized cash register systems, because he realized the technology would help franchisees improve operations and save money.

Carvalho also helped establish one of the first – if not the first – cooperatively run central kitchen. “Because we had the kitchens, we didn’t need to make donuts in the store, which meant we didn’t need as much space,” Carvalho says. Once Dunkin’ adapted to a smaller footprint, it enabled the brand to secure more locations, like strip centers, gas stations and convenience stores.

Carvalho is understandably proud of his accomplishments as a Dunkin’ Donuts franchise owner. But, there is one experience that stands out, and not only within the Dunkin’ community.

In 2013, after two brothers detonated fatal explosions at the finish line of the Boston Marathon, a manhunt for the bombers unfolded over five days, crippling the city. After one brother died in a shoot-out with police on Friday after the Monday Marathon, the other was eventually found holed-up in a sailboat, stored in a backyard. This all took place in Watertown, Mass. where the Carvalho business is based.

Once the police declared a lock-down for the city, the Carvalhos kept their employees inside their stores, and served coffee and snacks to the only people who were on the streets and in the mall: the police.

“We just told everybody, ‘give them whatever they want,’” Carvalho recalls. After the suspect was captured, and things got back to normal, David Carvalho thought, “Our goal was to help our employees and community in any way we could. We hoped it would all work out. They don’t teach you this stuff at business school.”

Nick Apostoleres was just 14 when his mother and father moved the family from New Jersey to Florida’s west coast so they could open a new Dunkin’ Donuts shop; the year was 1973.

“There was nothing there at the time,” Apostoleres remembers. “There were maybe three Dunkin’s in the entire market of West Central Florida. We were the fourth.”

Thomas Apostoleres had worked at a steel mill in Trenton, NJ, and chose to make the move because he recognized that the steel industry was in decline and wanted a fresh start. The family developed their first restaurant at 720 West Brandon Blvd. in Brandon, about 13 miles east of Tampa.

But even as the family was learning their new business and understanding their new customers, fate intervened. “My dad was diagnosed with leukemia and died two weeks later. He was just 49,” Apostoleres says. “We were really thrown into the fire.”

Apostoleres was 16, but ready and willing to take an outsized role running the business with his mother Kitty and sister Stephanie. Two years after Thomas died, the family purchased another location, near the famous Busch Gardens theme park. Stephanie and her husband ran that shop for a time, but ultimately decided to pursue other interests. When Apostoleres took over the operation, he had no idea it would change his life forever.

A young woman named Rosalie used to frequent the Busch Blvd. location on her way to work every day. After a time, Rosalie and Nick become acquainted, then better acquainted, and finally were married in 1994. After giving birth to her son Nicholas, Rosalie went to work for her husband’s family business—a move Apostoleres calls “a game changer.”

Later, he purchased his mother’s share of the original Brandon shop so she could retire and took perhaps the most significant step of his career, buying a piece of land a half a mile away onto which he could relocate the shop and build a drive-thru. The move gave Apostoleres ownership of his land and the drive-thru doubled his sales. For a time, the Brandon shop was the busiest Dunkin’ in the state of Florida. The increased profits helped him buy land to develop other locations.

Apostoleres says Tampa, like many southern markets, treated Dunkin’ Donuts like a donut shop, not a coffee stop. “The Tampa market wasn’t like those markets in the Northeast. It took years for the market to transition from donuts to coffee,” which meant he needed to be careful with site selection. “You can’t have the same kind of density with donut shops as you can with coffee shops.”

Part of his job has always been working closely with Dunkin’ Brands to help them understand the regional differences, like seasonal marketing. In New England, summer was Dunkin’s busier season and got more marketing support, but in Florida, summer was the slow time; winter – with its influx of snowbirds from the north – was prime time. He fought to have greater marketing muscle for Florida’s busy season.

Working with the brand became Apostoleres’ mission. He joined the Ad Committee, served in leadership roles on the RAC and eventually served 3 terms on the BAC.

“My goal was always to help the franchisees here work with the brand to see the Florida had every opportunity to succeed,” says Apostoleres, whose first term on the BAC coincided with the end of the Great Recession, which was particularly hard on Florida.

In the following years, more Dunkin’ locations have opened in Florida, and more money has been funneled into advertising. The result, Apostoleres says, is that today Tampa behaves more like a Northeast market, though coffee is still only 50 percent of sales and competition for cheap coffee from convenience stores and McDonalds is more intense than in many Northeast cities.

While he prefers not to soak in the limelight, Nick Apostoleres appreciates being added to the DDIFO Franchisee Hall of Fame. He recognizes that his career with Dunkin’ Donuts has coincided with the brand’s success in the Southeast. 40 years ago, Dunkin’ was a bit player in the Tampa market. Today, thanks to the commitment of the local franchisee community – and the hard work of the Tampa franchisees in particular – Dunkin’ is a household name.

“I’ve been blessed to be a part of this brand and to have the success I’ve had,” Apostoleres says. “I owe that success to my parents, Thomas and Kitty, who had the courage to relocate their family to Florida and start a new life with Dunkin’ Donuts.”