Nominations for inaugural inductees are now being accepted 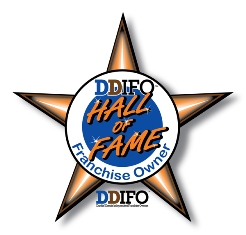 As Dunkin’ Donuts was thrust into the spotlight during its recent IPO, the company’s strong history of franchising was also put center stage. As it looks toward further expansion, Dunkin’ Brands is again relying on its roster of experienced, hard working and well-capitalized franchise owners to carry the ball.

In light of Dunkin’s dynamic history of franchising, DDIFO is establishing a Franchise Owners Hall of Fame to recognize those individuals who have contributed to the success of Dunkin’ Donuts. “These individuals have gone above and beyond to help build Dunkin’ Donuts into the esteemed brand it is today,” said Jim Coen, president of DDIFO.

Coen is reaching out to DDIFO members to nominate individuals for induction into the Hall of Fame and will also ask DDIFO’s Board of Directors and Roundtable to nominate franchisees of distinction. The top 5 vote-getters will be honored as inaugural members of the DDIFO Franchise Owners Hall of Fame at the DDIFO National Members Conference Gala Dinner at Mohegan Sun, September 19, 2011. The event starts 6:00 pm. Inductees will receive a handmade glass plaque from Peggy Kerr Glass; winners will be informed of the honor prior to the presentation.

“For over 50 years Dunkin’ Donuts Franchise owners have worked hard and long hours, invested their resources, and involved their families in every aspect of the business, while developing a strong and loyal customer base,” said Coen. “We believe it’s time for DDIFO to recognize those people whose vision, dedication and leadership have been instrumental in the success of Dunkin’ Donuts.”

Nominations may be submitted up until September 2, 2011. The ballots will be sent out September 6 and tallied on September 9.