Since the beginning, Dunkin’ Donuts franchise owners have taken great pride in their business. Whether it’s one shop or a large network, franchisees don’t see this as a job. For many it is a family affair that extends to long-time friends and colleagues.

This year DDIFO is honoring six individuals for their lasting impression to the Dunkin’ Donuts system. They make up the 2012 class of inductees into the Dunkin’ Donuts Franchise Owners Hall of Fame. On September 27, Manny Andrade, Brooks Barrett, Jason Dubinsky, John Rader, Bob Rosenberg and Michael Vale – the actor best known for his commercial role as Fred the Baker – will be officially installed into the Hall of Fame during a ceremony coincident with the DDIFO National Members Conference at Mohegan Sun. 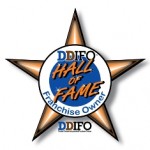 Michael Vale aka Fred the Baker

“We need to recognize the pioneers and those who got us to where we are today,” said John Motta, chairman of the Hall of Fame Nominating Committee which also included, Bill Daly Sr., Mark Dubinsky, Steve Gabellieri, Dennis Gramm and Anthony Pellizzi.

Launched in 2011, the Dunkin’ Donuts Franchise Owners Hall of Fame was established to recognize the pioneers and visionaries that helped build Dunkin’ Donuts from the beginning – not just the franchise owners, but also those who have created a lasting impact on the system. The inaugural class posthumously honored seven important men: John Boujoukos, Antonio Couto, Jose Couto, Ralph Gabellieri, John Henderson, George Mandell and Dunkin’ Donuts Founder William Rosenberg.

The Committee carefully reviewed numerous nomination forms this year before making its selection. “One of the important attributes is being able to determine whether the nominee has made a lasting impression on the brand and the system,” said Gabellieri, whose father was part of the inaugural class. “When my dad was selected it was an honor and a surprise because DDIFO has always been an organization centered on franchisees and my dad was a lifer with the Brand. So it was touching that he was honored that way.”

This year’s class represents some of the earliest franchisees to sign on with the system. They got involved when Dunkin’ was still a family business. The class also honors a member of the Rosenberg family plus the one man who became the public face of Dunkin’ for 15 years. Michael Vale’s portrayal of Fred the Baker helped make Dunkin’ a household name and helped the pioneering franchise owners expand their footprint and increase their customer base.

“My dad is greatly honored to be named to the Hall of Fame,” said Dubinsky, who, with his father, Jason, helped build a strong network during his 37 years as a Dunkin’ Donuts franchisee.  “It was a definitely a family business. My brother, mother, aunt, uncles, cousins all worked like crazy in the early days. Dad is really looking forward to seeing all his old friends and catching up on old times at the gala. It’s going to be great,” he said.

For more Information about the DDIFO National Conference Click Here.

To register to  attend the DDIFO National Conference