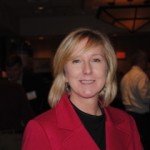 DDIFO Sponsorship Director Amy Levine has announced she accepted the position of Vice President and Executive Director of the Cape & Islands United Way, the largest non-governmental human service organization in that region.

Levine joined DDIFO in 2009 to develop the sponsor program and has had great success, growing it from fewer than 10 vendors to more than 50 including a core of companies that regularly sponsor the DDIFO website, publications and members’ meetings.

“I’m proud of all that we’re now able to deliver to our members. And I’ve really enjoyed my interactions with the sponsors—listening to them and figuring out the best tools to help them reach their goals,” Levine said.

DDIFO President Jim Coen says Levine helped raise the professionalism and quality of the membership meetings and has spurred improvements in all avenues of communications with members.

“It’s been fantastic working with Amy. She built a strong program which has allowed DDIFO to take our meetings to the next level. We wish her well at the United Way.”

Levine started her professional career at the United Way’s Boston branch working with the man who is now President of the Cape & Islands branch. Levine says when the new position opened Richard Brothers immediately reached out to her.

“It’s nice to see my career come full circle, and it’s a gift to be able to work with and learn from Richard. Plus, the Cape and Islands United Way is an amazing organization,” said Levine.

“I’m really going to miss the whole Dunkin’ Donuts franchise community and getting to know the people and the families behind the brand. I’m proud to have been part of their circle.”