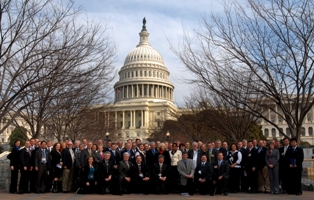 On February 3-4, 2010 DDIFO Legislative Affairs Coordinator Rob Branca will be in Washington representing the DDIFO at the second annual CFA Day (Coalition of Franchisee Associations).

“I’m really looking forward to getting together with other operators from other franchise systems and with our elected officials and their staffs to discuss important legislation,” said Branca. “It’s important that we bring our perspective to these folks and discuss how new laws and reforms will impact our businesses.”

Last year, DDIFO President Jim Coen attended the first CFA Day. “It was a tremendous experience and demonstrated to me that DDIFO needed to be at the table with other franchise groups, members of Congress and their staffs to ensure our agenda was understood,” said Coen.

According to Misty Chally, the Deputy Executive Director for CFA, representatives from 10 different franchisee associations make up the CFA Board of Directors. Each system sends two people to be a member of the CFA’s Board of Directors. She says the idea of bringing franchise representatives directly into the halls of Congress grew out of an interest among franchise groups to get involved in the legislative issues of importance to their business.

“It’s impossible for franchise owners to keep up with all the issues and initiatives that can impact their business, that’s why CFA keeps them updated and acts as their voice on Capitol Hill,” said Chally. “The first CFA day on the Hill was a huge success and we’re looking forward to another successful event next year.”

Among the issues Branca is eyeing for 2010 are healthcare reform, credit card fee reform and cap-and-trade. Healthcare reform will, of course, impact virtually all businesses in the U.S. but, as Branca points out, Massachusetts franchise owners are already working under a healthcare reform law that mandates employers with 11 or more employees are required to provide health insurance coverage or pay a “Fair Share” contribution of up to $295 annually per employee.

Credit card fee reform is also something of great interest to all retailers. Currently three separate bills have been introduced in the U.S. Senate and House of Representatives. The toughest, from Senator Richard Durbin [D-Ill.], would give retailers antitrust protection so they could jointly negotiate lower rates. Also, merchants would have the option of not accepting cards that charge them higher fees, which are used to offer consumers rebates and perks. One of the House bills would let stores charge minimum and maximum amounts for card purchases. Currently, fees are split between the merchant’s bank and the card-issuing bank.

Congress has already passed the Credit Card Accountability Responsibility and Disclosure Act of 2009, or Credit CARD Act of 2009, which will go into effect in February 2010.

Branca adds, he expects lawmakers he meets at CFA Day will listen to the concerns the DDIFO and other small business representatives have regarding the current fee system.

“Its important lawmakers hear from constituents,” said Giannino. “Often times in Washington you see special interests walking in and out of hallowed halls of Congress. But, when a group of local business owners take time out of their schedules to visit Capitol Hill and talk about an issue—that has impact.”