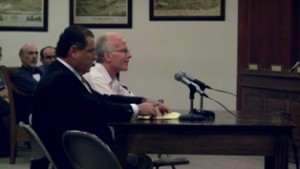 Dunkin’ Donuts Independent Franchise Owners (DDIFO) provided testimony on June 29, 2011 at the beginning of a committee hearing on a fair franchising law sponsored by State Senator Brian A. Joyce, they also produced a video of that testimony.

Former Dunkin’ Donuts franchisee Stan Furash discusses his experience of how his franchise was both unfairly and non-contractually terminated because his wife no longer resided in the same state as the store.

DDIFO is one of several major independent franchisee associations that supports the Coalition of Franchisee Association’s Universal Franchisee Bill of Rights.

Testimonials by other franchisees and attorneys that are not on this video were presented during the day.