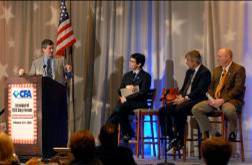 On May 20 and 21, members of the Coalition of Franchise Associations (CFA)—representing about 50,000 franchise shops throughout the country—gathered for a meeting in Washington, D.C. Founded in 2007 (DDIFO is one of the founding members), the CFA brings together some of the largest and most reputable independent franchisee associations with a mission “to leverage the collective strengths of franchisee associations for the benefit of the franchisee community.”

DDIFO sent two representatives to the meeting: Robert Branca, Jr., a Dunkin’ Donuts franchise owner and DDIFO member, and Joseph A. Giannino, Founder and Principal of Government Relations Group, which consults for the DDIFO.

“The agenda was fast moving and interesting. The organizers clearly had considered the varied interests of those in attendance, and the guest speakers articulated effectively on each topic,” says Giannino. “I left having learned a great deal and feeling comfortable enough with the relationships I established while there to call upon any of the people with a request for information or assistance.”

The first day of the CFA meeting focused on discussions about how individual associations can best engage their members and how the CFA benefits its members as well as issues common to all types of franchise owners such as transitioning to new ownership, franchise agreements and legislative matters. Attendees also brainstormed ideas for the 2010 CFA Day Forum, which will take place in February 2010 in Washington, D.C.

“I am energized to increase the participation of DDIFO members in the next CFA Day, which provides direct access to important legislators who are eager to hear firsthand from small business owners. I am also anxious to get Dunkin’ Donuts members to utilize the CFA Votes tool more effectively,” says Branca, who volunteered to lead the government relations initiative for the DDIFO. “The CFA Votes tool allows franchisees to simply type their names and addresses into a form and have a letter in support or opposition to various pieces of legislation automatically sent to their Representatives and Senators.”

The Healthy Families Act would place a rigid paid sick leave mandate on all business owners that would severely impede Dunkin’ Donuts franchise owners’ ability to properly staff stores. Both the DDIFO and the CFA assert that, if passed, the impact of this legislation, when combined with the paid leave programs that franchise owners and operators already offer and comply with, would be devastating. Both organizations oppose this act.

Currently, credit card issuers operate essentially as a monopoly with little oversight. They create the rules and merchants, if they want to accept credit and debit cards, must comply. The Credit Card Fair Fee Act would require credit card companies to negotiate directly with merchants in setting and disclosing interchange fees. Other issues of Payment Card Industry (PCI) compliance were also raised, including the ability to charge different prices for cash transactions versus credit/debit card transactions and the liability and costs incurred by merchants in holding identifying data as required by credit card companies. The CFA and DDIFO support the Credit Card Fair Fee Act.

The CFA asserts that the Employee Free Choice Act (also known as “Card Check”) is misnamed in that it actually would strip employees of their right to a secret ballot during union organizing campaigns. In addition, once a majority of employees in a business votes to unionize, if there is an impasse in collective bargaining, federal arbitrators would have the power to set wages, benefits, hours and other terms of employment. The CFA and DDIFO oppose this act.

There are two proposed menu labeling acts, LEAN and MEAL. The LEAN Act would impose national nutrition labeling standards, while still providing reasonable flexibility for chain foodservice establishments. Branca says that Dunkin’ Donuts is nearly in compliance with LEAN already. The MEAL Act is far more rigid, requiring more nutritional information to be posted on menu boards and other signage. Branca says compliance with MEAL would pose a significant logistical challenge for Dunkin’ franchise owners. The CFA and DDIFO support the LEAN Act, but oppose the MEAL Act.

To make your voice heard on the legislative issues referenced above, go to CFA Votes and click on the “Take Action Now!” link.

“All legislators—conservative, liberal and everyone in between—want to be seen as champions of small business, so the voice of the small business owner already gets the attention of Congress,” says Branca. “The CFA magnifies that voice and directs it where it can have the most effect. DDIFO membership in the CFA is a powerful and invaluable relationship that significantly benefits us all.”