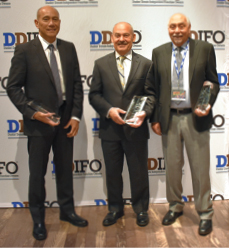 Every year, the DDIFO Franchise Owners Hall of Fame honors those franchisees who have made significant and lasting contributions to build the Dunkin’ Donuts brand. This year’s inductees are Adrian Gaspar, Jose Salema, and Rod Valencia. 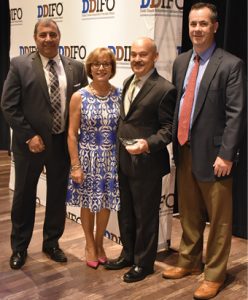 Long before he held the keys to his own shops, Adrian Gaspar had roots in franchising. His accounting firm, Adrian A. Gaspar & Company, was an established and respected accountant, serving a clientele of hundreds of Dunkin’ Donuts shops, plus other small businesses.

“I started my company with my wife Connie by my side. Since then, we’ve moved three times and have grown to six partners and 37 staff members. A lot has changed but our dedication to our clients remains constant,” he told the audience at the Hall of Fame Luncheon in New Orleans. “In 1996, I was helping a client who wanted to sell some of their stores. After we figured things out, the client asked me if I wanted to buy two,” he recalls.

“I became a franchisee [and] have been able to gain a better understanding and perspective of the Dunkin’ business that has helped my clients and me. When my clients ask things that they hear about at meetings, I’m there too so I know what they are going to ask me and, I try to research it even before they ask,” he said. “By knowing them and being with them, being amongst them, I have come to appreciate the hard work they do on a day to day basis.”

The experience has benefited both sides of his career, Gaspar says. “I have some very savvy clients, and I’ve learned a lot from them, probably more from them than they’ve learned from me.”

As he stood on the stage and accepted his induction into the Hall of Fame, Gaspar reflected on his career and his affection for those in the Dunkin’ system.

“Being part of the Dunkin’ family has blessed me with many lasting friendships. One in particular comes to mind, my friend and mentor Tony Couto. Tony helped many of us, may he rest in peace.” Tony Couto and his brother Jose were among the first inducted into the Hall of Fame in 2011.

“I’m so honored to be here among such a group of intelligent and especially hard working people [and] humbled to have the opportunity to be inducted with a group of people that have been larger than life to me.” 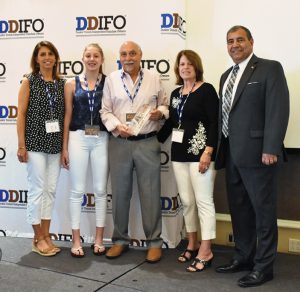 Jose Salema is one of many Dunkin’ Donuts franchisees who traces his roots back to the Azores. When he came to the United States he was 23 and eager to start a new life. After working for 10 years in a cable factory, he followed the advice of his brother-in-law Carlos Andrade, who was already established as a Dunkin’ operator and learned how to bake donuts.

“’It’s a good thing to try,’ Carlos told me,” Salema recalls. “So when I took my vacation in July of 1979, I spent two weeks with him, learning how to bake donuts.”

Salema, like so many Portuguese immigrants, seized the opportunity to be an entrepreneur, accepting the guidance of family members and close friends in the system. With hard work, he was able to establish a lasting business for his family. Salema also gave a shout out to Tony Couto. “[Tony] helped me tremendously and I will never forget it,” he said, sharing how Couto helped negotiate the terms for Salema’s first Dunkin’ shop in Exeter, New Hampshire. Couto’s daughter, Maria Mello, who was in attendance with her husband John, thanked both Salema and Gaspar for publicly remembering her dad.

Salema’s family is well known and respected among Dunkin’ owners and operators, and at the luncheon, attendees got to learn a little more about his granddaughter Lauren who is 13 years old.

“She was so excited to come here and share this special moment with me,” he said, noting that she bought a new dress to look her best when he received the award and recognition for his work as a franchisee and contributions to the Dunkin’ system. But, because state law in Louisiana forbids any person under the age of 21 from setting foot into a casino, and the luncheon was held in the Theater inside Harrah’s Casino, she could not attend.

“It’s not anybody’s fault, but it is just really sad for her,” he commented. Later DDIFO Executive Director Ed Shanahan promised to more closely review the rules to ensure no family members would be excluded because of age at future Hall of Fame events.

In his interview with Independent Joe prior to the luncheon, Salema shared his feelings for the brand and the people who proudly fly the Dunkin’ Donuts flag.

“I’m pleased, and humbled, to be part of a large group of great franchisees, both those before me, and those still to come. These 39 years have been a privilege. It’s a great group; I’m honored to be sharing the spotlight with one of the first people I met, my accountant and friend Adrian Gaspar.”

Salema’s heartfelt comments drew loud applause from the audience and smiles from the families of those he mentioned. 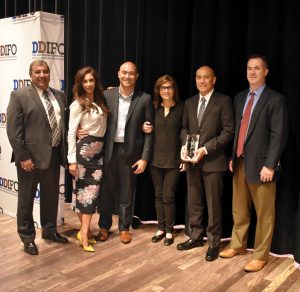 Aside from the professional success he’s achieved over 35 years as a Dunkin’ Donuts franchise owner, Rod Valencia has conquered great challenges. Chief among them may be his ascent to one of the highest points in the world.

When his son Rex and daughter Joumana introduced their dad as a 2018 Hall of Fame inductee, they reminded the audience that Valencia had once climbed Mount Kilimanjaro in order to raise money for the Dunkin’ Donuts Community Foundation. Valencia has a passion for adventure – hiking, trekking and scuba diving – which complements his passion for the Dunkin’ brand.

“To say I am delighted to receive this honor and recognition from my peers would be an understatement,” Valencia he said as he stood behind the podium on the Theater stage.

“I’d like to thank DDIFO and the nominating committee for this great honor.”

Valencia, a native of the Philippines, first came to the United States for vacation, but wound up staying to help his cousin’s husband get started as a Dunkin’ Donuts franchisee. He found himself intrigued by the opportunity and unafraid of the adventure that would ensue. He learned the business, raised the capital and, in 1984, opened his first store in New York City.

Eventually Valencia grew his network throughout Brooklyn, Bronx, Manhattan and Queens. While his early success was welcome, it also posed a challenge.

“We opened too many stores, too fast. At one point, [we opened] a store every other month—12 stores in 18 months.” Valencia recalls that he had to scale back the business in order to build an organizational structure to support future growth.

Today, Valencia’s network includes stand-alone Dunkin’ shops, satellite stores and combos, which feature Baskin Robbins and Togo Eateries in New York and Florida. He and his family have also expanded in other franchised brands: Checkers, Rally’s, and Popeye’s restaurants.

Throughout the years, Valencia has always tried to share his knowledge with other franchisees and help his employees move up the ladder. “Some have become franchisees themselves,” he says proudly.

Valencia’s adventuresome spirit is sometimes masked by his quiet and calm persona. Even when he was told he would be honored in the DDIFO Franchise Owners Hall of Fame, Valencia said he didn’t believe it.

“When [nominating committee Chairman John Motta] asked me if I could come to New Orleans to accept the recognition, I thought there was a catch to his question, but I immediately said yes anyway. I have been a franchisee for 35 years and have received numerous awards and recognition from the brand and others, but this recognition from my peers tops it all,” he said.