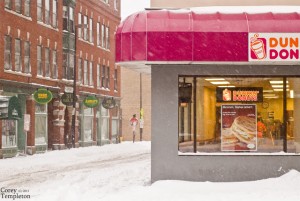 In earnings calls at the year-end, Dunkin’ announced less than stellar earnings over the past year.  Our restaurant analyst, John Gordon of Pacific Management Consulting Group, advises that Dunkin’ pre-released its bad news last week, indicating that US Dunkin same store sales, international results and earnings would be lower than forecast in both 2014 and 2015, the third such “down” result of the year.  Dunkin confirmed weak same store sales in the US, with Q4 estimated at about +.5%.  While exact components were not announced, it seems that the price increase taken earlier did not yield much; product mix shifts appeared to be negative, resulting in a lower average check.  Notwithstanding, Dunkin’ continues to crank out new units, with 410 – 440 new US opens planned for 2015.