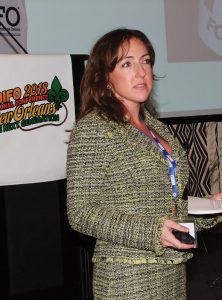 Of the many notable discussions featured at the DDIFO National Conference, one that got especially heated centered on the National DCP and overall supply chain trends. Attorney Sarah Walters, special counsel for Foley & Lardner, explained why supply chain management is so integral to a successful franchised system. She said increased regulatory and product liability risk, food safety, changing consumer habits and technology innovation are all driving change. Customers want it all, and franchisees are expected to deliver.

In terms of innovation, Walters said lessons can be learned from companies like Amazon and Alibaba without trying to be them. She also mentioned the capabilities of facial recognition for customer service and robotics in automation of the supply chain, along with Blockchain—a shared ledger for recording the history of transactions—which she said has “enormous utilities” even though use is still in its infancy. But innovation isn’t just about adopting emerging technology. It can come in the form of improving existing processes and setting goals that impact the bottom line.

One way to do this is by being constantly aware of how your supply chain is functioning. Walters stressed the need for transparency and communication between corporate and franchisees and franchisees and their co-ops. In the Dunkin’ system the National DCP, which has grown into a $2 billion supply chain management company serving franchisees, is one of the “best in class,” according to Walters, along with supply chains for Yum! Brands, Wendy’s, Subway, Applebee’s/IHOB and Burger King.

“Co-ops have been successful because they’re independent and focused solely on supply chain,” she said. “It’s not just the supply chain, it’s what’s happening from a climate standpoint, geopolitically, [and on the] regulatory front both domestically and internationally. Most franchisors don’t dedicate the personnel or resources to be able to deal with it.”

In response to audience questions about transparency and communication between franchisees and DCP, Walters said solutions need to be collaborative. Key performance indicators and regular reporting are keys to success. She said people need to come first and the right people engaged early and often. “This gives franchisees a place in the supply chain decision,” she added. 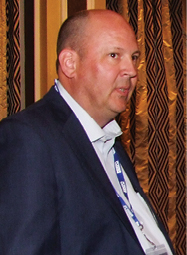 Scott Carter, the National DCP’s chief executive, was also in the audience and shared his thoughts after Walters’ presentation. “The key differentiator for us is we own distribution,” he said. “We have nine buildings around the country that provide those services directly to stores. Distribution was the genesis behind our creation.”

DCP started as a membership cooperative created by Dunkin’ franchisees in the Northeast in 1983 to leverage more buying power. Similar entities formed in other regions of the country, merging together to create National DCP in 2012. Headquarters was relocated to the Atlanta area in 2013 in order to better serve 8,900 U.S. quick service restaurants and customers in 51 countries.

In terms of transparency and communication, Carter said NDCP has made communication with members a priority, building an internal team and investing in a web portal just for members to see financials, minutes from board meetings, limited time offers, etc.

“Every year, we make significant improvements in providing transparency,” he said. “All brands have a bad habit of marketing saying this next, best, great program is good enough, let’s roll. They make speed the primary driver of decision making and make errors in the supply chain that become very costly.”

Carter added that a co-op like NDCP, which manages that process with its brand, can further add visibility to decision making and hold all parties accountable.

According to Walters, “Accountability is key to the success of a supply chain and a co-op’s ability to maximize efficiencies in the supply chain. Transparency and accountability of the brand and in the operation of the co-op are integral to establishing the trust among co-op members that is necessary for the supply chain to function effectively.