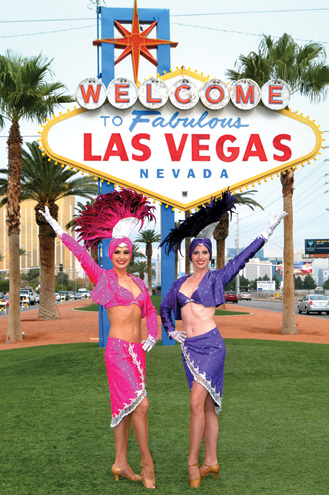 You won’t be alone.

In addition to the other DDIFO conference attendees, you’ll be joined by countless other organizations, Vegas hospitality employees, entertainers, gaming personnel and others who have all come together to make Las Vegas the most popular conference and business meeting destination on the continent, if not the world.

Vegas has consistently ranked number one out of 40 North American destinations by major meeting and convention decision makers, according to STR, a leading authority on hotel industry performance trends. Vegas has also been named the top trade show destination in the United Sates for a record 20 consecutive years, according to Trade Show News Network.

Heidi Hayes, public relations manager of business for the Las Vegas Convention and Visitors Authority (LCVCA), notes the city has hosted 53 of the largest 250 shows in North America.

“It’s in our DNA—we’re founded on tourism,” says Chris Meyer, Vice President of Global Business Sales for the LCVCA. “And we don’t close up at 9 at night.”

What makes Vegas so attractive for business meetings beyond the entertainment options after the work day is done? Value for everyone, Meyer says. In 2013, there were 22,213 meetings in the area, ranging from a ten-person board of directors meeting to an electronics show with more than 160,000 attendees.

Such range requires many options, and Vegas has them all. “They’re at every price point, whether it’s a value proposition or a very high end proposition,” says Meyer, who has worked in the Las Vegas hospitality business for the past 35 years. “We have the infrastructure, the latest and greatest with regards to business presentation technology, and we do it better than anyone else.”

Meyer remembers the time, early in his career, when Chicago and New York were more popular meeting destinations. Over the years, San Francisco, Orlando, and Las Vegas have since eclipsed them—with Vegas coming out on top.

And if you build it, they will come. According to the LVCVA, more than 219, 000 resort industry employees work in the city, and there are nearly 151,000 hotel and motel rooms – at various price points – in Las Vegas. Providing an exciting and enjoyable site for meetings of all sizes is big business in Las Vegas and the city wants every visit and every meeting to be a big success.

History as a Hotspot

A lot has happened in a relatively short time to make Las Vegas the destination it is today. The area itself was named Las Vegas – Spanish for “the meadows” – by Rafael Rivera, the first European to discover the valley in 1829. By 1855, Las Vegas was noted as a halfway point between Salt Lake City and Los Angeles; members of the Mormon Church built a fort in Las Vegas to use as a stopover as they travelled to and from the two locations to gather supplies. You could say that marked the beginning of using the area as the site of a business meeting.

Eleven years later, Nevada was named the 36th state in the United States, with mining, agriculture, and – by1900 – railway travel, helping establish the state economy. In 1905, Las Vegas was chartered as a city. It would go on to become the most populous North American city established in the twentieth century, according to Meyer.

It didn’t take long for the entertainment industry to spring to life in the desert. Vegas’s first theater, the Isis, opened in 1909. While gaming flourished illegally for quite some time, it officially became legal in 1931, right around the time air conditioning systems were created to control the climate inside large spaces.

Throughout the 1940’s hotels with names like the Last Frontier, the Thunderbird and the Flamingo – owned by famed mobster Bugsy Siegel – offered a glitzy getaway and the promise of riches. Airplanes provided direct flights from Los Angeles and others drove across the desert to soak in the scene. In 1944, Liberace made his Vegas debut; seven years later Frank Sinatra first performed at the Desert Inn.

After the state of Nevada assumed control over gambling and tax collection – the area boomed even more. From 1950 on, Vegas saw the opening of a lavish new hotel and/or casino nearly every year into 1970s. By 1977, gambling revenues in Clark County totaled more than $1 billion.

As of 2013 (the latest figures available from the LVCVA), Clark County welcomed more than 5.1 million convention or meeting attendees and collected $9.7 billion in gaming revenue. The place works because after the last conference session of the day is over, attendees have a mind-boggling array of activities and events to occupy their evenings.

One might think that people come to Vegas under the guise of attending a business meeting, then skip out to have fun, but Meyer says that’s not the case.

“That happens a lot in destinations with beaches, that people are leaving the conferences early, but here, you’re not missing out on anything,” he says. According to research reported on vegasmeansbusiness.com, attendance increases an average of eight percent when trade shows are held in Las Vegas and declines three percent when held in other locations.

“While we have tons of daytime activities, most of our entertainment is at night. Our destination is about adult freedom and we deliver on that promise: we have shows, fine dining and spas. We have gambling too, but that’s not people’s main reason to go to Vegas anymore.”

And, he adds, because the city never closes, people aren’t scrambling out of their conferences to grab a reservation at just one really well-known restaurant.

“We are constantly evolving, and if someone hasn’t been here in a while, they will be surprised by how much there is to do,” says Meyer. “Just walking around the Las Vegas Boulevard—it’s sightseeing at the highest possible level. There’s a lot to see and do. It’s visually stimulating.”

Some of the newest attractions to open this year include the indoor El Loco roller coaster at the Adventuredome amusement park at the Circus Circus Hotel. With only four people allowed in a car at a time, the open-air El Loco takes you on a twisting, stomach-churning 72-second ride of a lifetime. The High Roller at the LINQ is the world’s largest observation wheel—a giant Ferris wheel that holds up to 40 people each inside one of the 28 glass spheres. The wheel takes 30 minutes to rotate once, giving people the opportunity to look out onto Vegas’s lights and sights from up to 550 feet high. The LINQ is a new outdoor entertainment, shopping and dining mecca from Caesars Entertainment. The Voodoo Zipline at the Rio Hotel and Casino is a high-flying ride 490 feet up in the air at about 33 miles per hour. Riders can go solo or with a partner and zoom between the Rio’s Voodoo Lounge to the Ipanema tower, and back again to the starting point.

Such amusement rides aren’t your thing? Take in one of Vegas’s legendary shows. Britney Spears will perform on Oct. 18 and Oct. 22 at Planet Hollywood. Shania Twain headlines at Ceasars Palace on Oct. 21. Other ongoing area shows include several Cirque du Soleil performances, David Copperfield, Donny and Marie Osmond, Jersey Boys, and more—there’s truly something for everyone on the Vegas entertainment scene, which helps make Las Vegas a destination like no other.