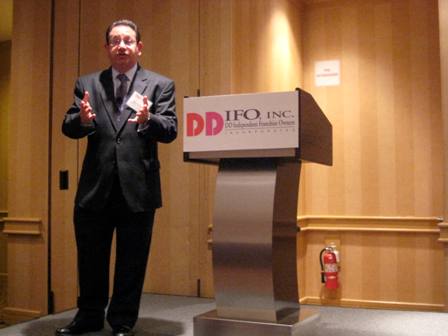 Mark Silverstein sitting at his desk in Concord, NH

Owning and operating a combination of franchise brands has been part of franchising since the 1960’s. Among the first successful examples of multi-concept franchise ownership was Dunkin’ Donuts and Howdy Beefburgers.

William Rosenberg, who founded Dunkin’ Donuts, also founded Howdy Beefburgers a popular burger franchise in the Boston area which grew to approximately 27 locations until it closed in the late 70’s.

One of the first franchise owners was Sam Silverstein who opened a combination Dunkin’ Donuts and Howdy Beefburgers on South Main Street in Concord, NH in 1965. His son Mark came to work for him in 1967 and has been a Dunkin Donuts franchise owner ever since.

Mark remembers that the combination of Howdy’s and Dunkin’s was amazingly profitable. “Everybody loved their Dunkin’ Donuts in the morning and their Howdy’s for lunch and dinner,” he said. “Those two shops brought in customers morning, noon and night. Howdy’s always did more business than the Dunkin’ Donuts did.”

Unlike today’s Dunkin’ Donuts and Baskin Robbins combo stores which essentially share the same space and physical plant, the original combination of Dunkin’ Donuts and Howdy Beefburgers only shared the parking lot. The two buildings and their operations were totally separate.

The multi-concept franchise model worked so well for the Silversteins that in 1969 the family also opened a Kentucky Fried Chicken (KFC) franchise just down the street from their Dunkin Donuts and Howdy Beefburgers. Eventually they opened a second KFC.

The Silversteins later opened Dunkin’ Donuts franchises in Sanford, ME; Portsmouth and Rochester, NH. Eventually Mark decided to sell the other Dunkin’ Donuts and concentrate his ownership solely to the Loudon Road location in Concord, NH.

Mark is pleased with his investment in Concord, “The capital city of New Hampshire is a wonderful community, filled with good people, loyal customers and dedicated employees, we’ve enjoyed having some employees for over 40 years, as well as some families that contributed multi-generations of employment to our operations,” he said.

Mark is known to many in the Dunkin’ Donuts community for his service on DCP boards for over 25 years. He noted how operations within Dunkin’ Donuts and KFC are similar and said, “both systems require standards for cleanliness, speed and quality of service, both companies are diligent on high standards as well they should be. Product distribution is also similar in that KFC also has a buying cooperative that operates similarly to the DCP.”

But, he said the advertising piece is very different, “with KFC I am the President of the Boston Advertising Fund, franchise owners are directly involved in spending advertising dollars, which is not the case with Dunkin’ Donuts.”

Dunkin’ Donuts has other multi-concept franchise owners, University of Louisville basketball coach Rick Pitino teamed up with former University of Kentucky basketball players Jamal Mashburn and Walter McCarty to create Fast Break Donuts, LLC. The group has opened a Dunkin’ Donuts store in Lexington, KY and plans 16 more in the region. They are also investors in a company that operates 35 Outback Steakhouses and 28 Papa John’s Pizza restaurants.

Dunkin’ Brands was the premium sponsor of the 8th Multi-Unit Franchising Conference held this past April in Las Vegas. Attendees of the conference shared strategies for successfully continuing to expand, strengthen brand power and increase market share in today’s tough economy.

Some franchisors and franchise owners say the brands need not necessarily complement one another. Brands having nothing to do with each other can be operated separately and successfully, sharing only such infrastructure as bookkeeping and the same IT equipment, for example.

Thriving multi-unit and multi-concept franchise operators typically have an understanding of local real estate knowledge and extensive contacts, and access to financing to get successful units open quickly.

The trend toward multi-concept ownership is likely to continue for some time. Experienced franchise owners, are sophisticated business builders they typically can build faster, build stronger, and generate better margins. When you add the value of diversification, the benefits of multi concept franchising are hard to ignore.