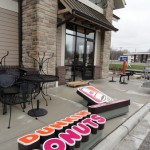 Menomonee Falls Patch reports that Dunkin’ Donuts will celebrate its grand opening in Menomonee Falls at the intersection of Silver Spring and Pilgrim Roads on Saturday.

Milwaukee Brewers players Corey Hart and Manny Parra will be on site, along with Special Olympics Wisconsin athletes to help commemorate the event.

Hart and Parra will meet with fans, serve guests and raffle autographed items at the new Dunkin’ Donuts restaurant from 9:00 a.m. to 10:30 a.m.  The players also will participate in a ribbon-cutting ceremony with the local franchise owners,  Dunkin’ Donuts leadership 9:30 a.m.

As part of its commitment to the people and communities in which it operates, Dunkin’ Donuts will donate $3,000 to Special Olympics Wisconsin to help support the organization’s softball and tee-ball Competition in July.  Following the ribbon-cutting ceremony, Hart and Parra will each pull the name of one lucky winner, who will be awarded  Dunkin’ Donuts coffee for an entire  year.

The new restaurant is owned by the Milwaukee Coffee Brewing Co., a partnership of six Dunkin’ Donuts franchisees who together operate more than 370 Dunkin’ Donuts restaurants on the East Coast.  The group plans to open 36 new Dunkin’ Donuts in southeastern Wisconsin over the next five years.

“We are proud to serve the hard-working people of Menomonee Falls and hope to become a popular destination and an everyday ritual for guests looking for high-quality coffee, baked goods and snacks,” said John Clark, vice president of operations for the Milwaukee Coffee Brewing Co.