President Obama recounted his conversations with small business owners facing economic challenges and seeking assistance from the SBA. “They’re people like Andy Cabral. Son of Portuguese immigrants, Andy started his business on an SBA loan and now runs 10 stores across Maryland and Virginia that employ 130 people. And Andy has already seen one loan fall through the cracks because of the financial crisis and he’s hit the cap on his SBA loans. But the measures we’re announcing today will help Andy and other franchisees pursue their plans to expand and create more jobs.”

According to Cabral, having the President reference him in the speech came as a complete surprise. Cabral said before the speech he was contacted by The Carlyle Group, one of the three private equity firms that own Dunkin’ Brands, but he never expected to be mentioned by name.

“You certainly don’t get up for work every day for all these years looking for that kind of recognition. You’re just working to improve customer service and sales and to make your business a success,” said Cabral. “But when it comes, you feel really good about it. It puts the icing on the cake. And I think it’s a good thing for the Brand, too. Even though the President didn’t specifically mention Dunkin’ Donuts he was aware Maria and I are Dunkin’ franchisees and that the Brand has been at the forefront of the push for such changes.”

Apparently, the Obama Administration contacted The Carlyle Group to help them find local franchise owners with SBA loans who also were well-versed in the SBA. Through a series of questions and a background check, Cabral and Icaza were vetted and ultimately invited to attend the event.

The President acknowledged that small businesses have “always formed the backbone of the American economy,” noting that in the past 15 years, “America’s small businesses have created 65 percent of all new jobs in the country. And more than half of all Americans working in the private sector are either employed by a small business or own one.” He went on to say, however, that the recession has hit small businesses hard with the loss of 2.4 million jobs from mid-2007 to the end of 2008 and with the tightened credit market preventing entrepreneurs from launching new businesses and impeding current small business owners’ ability to “finance inventories, make payroll or expand if things are going well.”

While President Obama mentioned ways in which the American Recovery & Reinvestment Act and the Financial Stability Plan already have been helping small businesses, he admitted there’s “no question that we’ve got a long way to go.” To that end, the President revealed the new measures his Administration is undertaking to boost lending to small businesses:

2. Improving access to credit by providing lower-cost capital to community banks that submit a plan to increase small business lending and by making low-cost capital available to community development financial institutions in the hardest-hit rural and urban communities

3. Asking Geithner and Mills to convene a conference on small business lending that will bring together regulators, lenders, congressional leaders and small businesses in the coming weeks

These crucial new measures are due in part to the nearly year-long efforts of the IFA as well as meetings between the Obama Administration and large franchise corporations like Dunkin’ Brands. 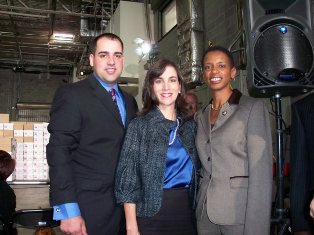 Regarding the impact of increasing the caps on SBA loans for Dunkin’ Donut franchisees, Cabral said, “This definitely should help depending where you are as a franchise owner. If you’re an experienced franchisee with a pretty aggressive growth plan, the SBA 504 loan program can be a great program, and the same for new franchisees with the 7(a) loans. You can’t beat the rates as compared to conventional loans and the programs help you keep equity in the right places. Increasing the caps will allow for more growth, especially considering all of the commercial properties becoming available on the market.”

“As far as increasing access to credit at smaller banks and institutions, it’s key for us,” said Cabral. “For experienced franchisees like me, we simply can’t continue to expand without better access to credit. It’s essential to keeping our businesses afloat and growing.”

While Cabral is pleased with the steps the President announced, he admits there are more issues with the SBA that he hopes the Administration will address moving forward. Luckily, after the speech, he and Icaza were able to speak, however briefly, with SBA Administrator Karen Mills. Cabral told her about problems with the way in which appraisals are being done. He thinks, largely because of new regulations, the appraisals are coming in very low and this causes a serious challenge with proving actual costs of property projects and investments. Icaza was able to tell Mills about problems she is facing with refinancing a 7(a) loan.

Both Cabral and Icaza are hopeful that when the small business lending conference is convened, as President Obama has requested, these and other SBA dilemmas will be part of the agenda. They certainly appear to have a solid commitment from the President who concluded his speech by saying, “To all the small business owners out there … I know that times are tough and I can only imagine what many of you are going through, in terms of keeping things going in the midst of a very tough economic climate, but I guarantee you this: This administration is going to stand behind small businesses. You are our highest priority because we are confident that when you are succeeding, America succeeds.”