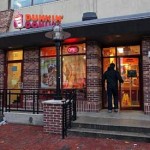 that Dunkin’ Donuts has filed a lawsuit alleging a husband-and-wife franchise-owning team tried to get reimbursement from the company’s marketing fund to pay for their son’s tuition and bookstore charges at the exclusive Belmont Hill School.

Dunkin’s franchise arm claims that Houman and Heather Baiany, the owners of four Dunkin’ locations in Boston and Somerville, submitted two checks totaling $7,498 for reimbursement from the company, claiming they were allowable charitable donations to the annual fund of the private, 37-acre boys’ school.

Each Boston area franchisee is allowed $2,000 a year per store from the marketing fund to invest in local communities to promote the Dunkin’ brand.

But the unusual amount of the Baianys’ donations – along with typos and grammatical errors in an accompanying thank-you letter allegedly from Belmont Hill headmaster Richard Melvoin – raised red flags with Dunkin’s accounts payable department, according to the federal lawsuit filed Friday in U.S. District Court in Boston.

When Dunkin’ contacted Belmont Hill, the school said Melvoin did not draft or send the letter, according to the lawsuit. It also said the two checks from the Baianys actually “were received by the school and applied to the student account” for tuition and bookstore charges of their son, who’s a student at the grade 7-12 school, the lawsuit states.