Earnings call overview: DBI delivered positive but modest same store sales, beat consensus earnings by $.01 but missed the revenue consensus forecast. Problems in DD international, DD withdrawal from Taiwan and continued US Baskin net store contraction didn’t seem to worry Wall Street, with the stock up $.83 or 2.2% at 200P EST. The sell side analysts were concerned that US DD comps would continue to fall, but actually wiggled up a bit, as seen below. DNKN’s earnings numbers continue to be affected by a lot of special one time adjustments, which makes the number hard to read. The adjustments make the sky high DNKN PE ratios look lower and more reasonable. Most of this memo will relate to US DD matters. The non-US DD discussion tone was guarded and “improvement will happen in the future”, with the market closure, and additional international DD supply chain investments required (always scary to Wall Street). There was even a Baskin ice cream revenue problem associated with the changeover to Dean Foods. There is no doubt that DD US is the total key to this company right now. 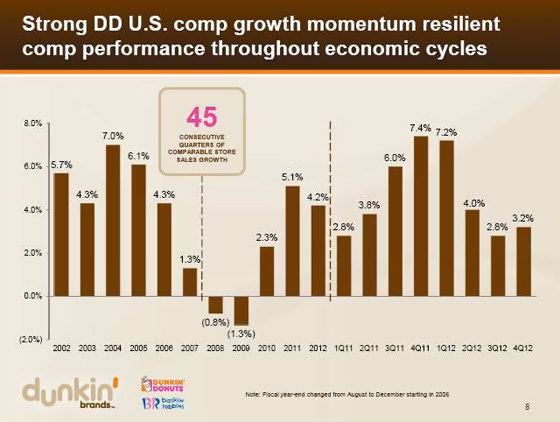 Nigel noted that traditional DD US store AUVs were now $1M for the first time ever. Nigel mentioned DD US shops in the west had already received a 300 basis points (3% of revenue) store EBITDA favorable impact due to the NDCP level pricing, and another 300 basis points in store expected later. 1 John Costello mentioned the rate of sales comp growth was better in the new markets. This seems to be confused by Nigel sometimes who says West AUVs are higher than in the core markets. Note that Starbucks US reported much higher traffic (+4%) versus DD US, and another smaller chain, Coffee Bean and Tea Leaf, reported this week same store sales gains in excess of 5% for 4 years straight. 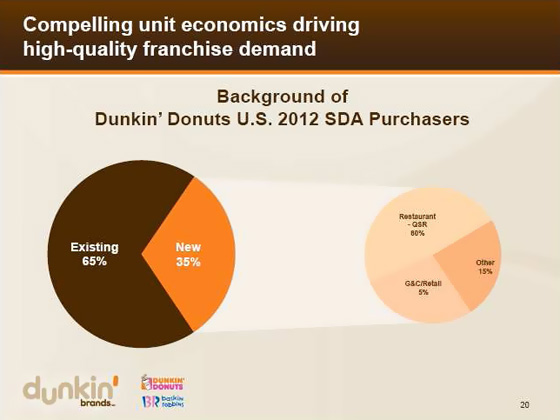 The brand continues to use the 2011 DD Store data, as AUV of $858K (all store types), buildout cost of $464K, and a 25-30% EBITDA payback. Working backwards, this indicates the US store EBITDA is approximately 13.5% or $116K per store. As I’ve discussed, that is a misleading metric because debt service and capital expense (CAPEX) isn’t included. 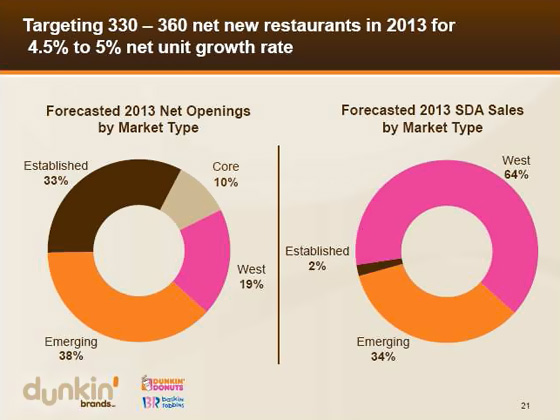