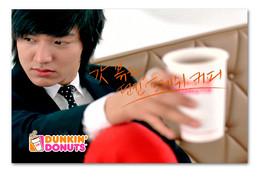 Julie Jargon and Sunga Park  of the Wall Street Journal report that Dunkin’ Brands Inc. is betting more Asian consumers will acquire a taste for its coffee and doughnuts as it ramps up its expansion in South Korea, the company’s top foreign growth market.

Dunkin’ has been in South Korea since 1992, but last year the Canton, Mass., company opened 191 stores there, and it plans to open an additional 100 by the end of this year. There are 663 Dunkin’ Donuts outlets in South Korea now, and Dunkin’ executives say they expect to double that number in the next decade.

With their austere interiors, Dunkin’ Donuts outlets in the U.S. cater to grab-and-go commuters seeking their morning caffeine fix. But in South Korea, breakfast is traditionally consumed at home, and most customers are young women and teenagers who go for a snack in the afternoon or evening.

“I come to Dunkin’ nearly every day after lunch to drink coffee,” said Shin Min-hye, 25 years old, an office worker at a Seoul law firm who was sipping an iced coffee and eating cacao honey dip munchkins at a Dunkin’ outlet. She was there studying English with a friend. “I like to hang out here because I can stay as long as I want to….I sometimes study here for hours.”

Dunkin’ stores in Korea encourage that kind of lingering with plush orange and yellow chairs, Wi-Fi Internet access and plasma-screen televisions. But Dunkin’s recently named chief executive, Nigel Travis, said he wants to get Koreans into the habit of picking up doughnuts and bagels on their way to work in the morning. “The trick we need to focus on is how we build a breakfast business,” he said.
The first challenge: creating a morning coffee habit in South Korea, where older generations favor tea. To do that, the company in April opened a coffee-roasting facility in Korea — its first outside the U.S. — so it no longer has to import coffee from America.

To emphasize the coffee’s freshness, Dunkin’ has been airing television commercials and running print ads explaining how its coffee beans go from the roasting plant to the store in seven days. Dunkin’ has also been offering free samples of coffee drinks in its stores, handing out discount coupons and offering loyalty cards to encourage repeat coffee purchases.

At a time when U.S. restaurant sales are slowing, American fast-food and casual restaurant chains are looking to Asian consumers, in particular, for sales growth.

Yum Brands Inc. has been expanding rapidly in China with its Pizza Hut, Taco Bell and KFC restaurants, as have McDonald’s Corp. and Starbucks Corp. Brinker International Inc. last month opened its first Chili’s Grill & Bar in India, and it is planning to open a new Chili’s in Singapore this month. The Dallas-based company, which also owns Maggiano’s Little Italy, Romano’s Macaroni Grill and On the Border Mexican Grill & Cantina, plans to open 500 restaurants outside the U.S. by 2014. It now has 1,500 U.S. outlets. Also last month, Wendy’s/Arby’s Group Inc. announced plans to build more than 35 Wendy’s restaurants in Singapore over the next decade.

Dunkin’, owned by a consortium of private-equity companies, doesn’t disclose precise information on its sales in Korea or by region. But in 2008, sales from Korea accounted for about 47% of the doughnut division’s non-U.S. revenue. Dunkin’ Brands also owns the Baskin-Robbins ice-cream chain.

Revenue from international operations accounted for about 10% of the $5.5 billion in sales from its doughnut outlets last year. Its U.S. doughnut stores are heavily concentrated in the Northeast.

Dunkin’ Brands chose to expand in South Korea because when the company entered the market 17 years ago, South Korea’s economy was stronger than those of many other Asian countries. And because of the longtime presence of American military troops there, Korean consumers have long been exposed to Western influences.