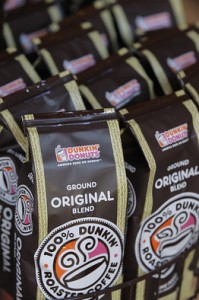 Lynn Cowan of the Wall Street Journal covers the big story that Dunkin’ Brands Group Inc., operator of the seemingly ubiquitous Dunkin’ Donuts chain, is the latest private-equity-backed offering to arrange to go public in the U.S., with the coffee and doughnut restaurant chain registering for an IPO on Wednesday.

Dunkin’ Brands, which was acquired in 2006 by a group of private-equity firms, registered to sell up to $400 million in common stock in an initial public offering; that number is used solely to calculate filing fees, so the final amount it raises could vary significantly.

The company didn’t specify a price range, share size or date for its IPO, but most deals take about three months from filing to launch, so it is likely to go some time this summer. Dunkin’ which operates the Dunkin’ Donuts coffee shop chain as well as Baskin-Robbins ice cream shops, plans to list on the Nasdaq Stock Market under the symbol DNKN.

Dunkin’ Brands Group is seeking some serious dough. The owner of the Dunkin’ Donuts chain as well as Baskin-Robbins ice cream shops, today filed to go public. (Sorry for the terrible pun.)

Bankers and market observers say more private-equity-backed IPOs like that of Dunkin’ Brands are likely to be filed this year, as the funds owning the stocks seek to exit positions they took years ago. In Dunkin’ Brands’ case, Bain Capital Partners, Carlyle Group and Thomas H. Lee Partners LP have owned the company for five years; they purchased it from liquor company Pernod Ricard SA for $2.43 billion.

Earlier this year, private-equity-backed hospitals operator HCA Inc. and energy company Kinder Morgan Inc. completed successful IPOs of more than $1 billion each. While the offering from Dunkin’ Brands isn’t likely to be as big as either of those deals, the company’s brand recognition is likely higher among investors, said Scott Rostan, a former investment banker and founder of Training the Street, a financial-services learning company that trains junior professionals at investment banks in accounting, valuation and financial modeling skills. Both Dunkin’ Donuts and the Baskin-Robbins brands date back to the 1940s.

“Dunkin’ is going to be a good bellwether on two fronts: one for private-equity backed companies seeking to go public, and also as further evidence of the strength and momentum of the IPO market this year,” Mr. Rostan said.