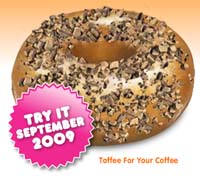 Dunkin’ Donuts selected the “Toffee for your Coffee” doughnut as the winner of its latest promotional contest, the company announced Friday.

Doughnut fanatic Jeff Hager of Hoover, Ala., created the “Toffee for your Coffee” donut, which is essentially a glazed, sour cream doughnut sprinkled with chopped up Heath Bars, according to the Canton, Mass.-based company.
Hager will collect $12,000 in winnings, plus Dunkin’ Donuts will begin selling his sour cream and toffee doughnut concoction this fall.