QSRWeb.com reports that as part of its greater China expansion strategy, Dunkin’ Donuts recently opened its first two shops in Shenzhen, Guangdong Province. The first shop is located on the first floor of the Gold World Business Center in the Luohu District. The second shop is located in the Liming Building, She Kou, Nanshan District. Additionally, a third shop is expected to open in mid-October, in the Jinzhonghuan Business Compound, Futian Central District. 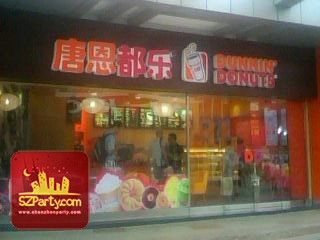 Shaanxi Stellerich Restaurant Management Co. Ltd., Dunkin’ Donuts’ franchise partner in Guangdong, is set to open more than 150 shops in Guangdong over the next 10 years. The company also is slated to open two additional locations in Shenzhen by the end of this year.

The Dunkin’ Donuts restaurant in Guangdong offers a complete menu of Dunkin’ Donuts internationally recognized coffee and baked goods. The restaurant will serve items customized to suit local taste preferences such as green tea donuts, mochi rings, which are cake donuts indigenous to the region, and iced fruit teas.

To date, Dunkin’ Donuts has secured agreements to open a total of 480 shops in Mainland China over the next 10 years and expects to sign additional commitments for expansion in other regions of China in the near future. Today, the company has nearly 1,800 Dunkin’ Donuts shops in the Asia Pacific region, including more than 10 in China, 725 in Korea, 600 in the Philippines, and 260 in Indonesia.