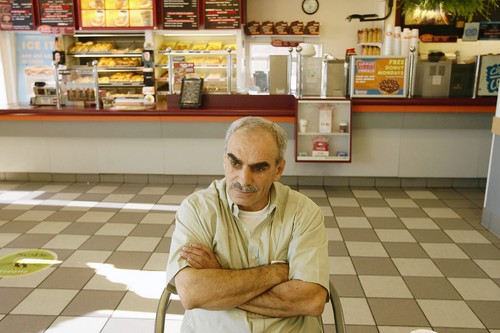 Walid Elkhatib refusal to handle or serve pork has resulted in having to give up his Dunkin' Donuts franchise. "What is life without dignity and your beliefs?" he told a reporter in 2007. (Tribune photo by Candice C. Cusic / July 30, 2007)

An Arab-American owner of a Chicago-area Dunkin’ Donuts store has to give up his franchise after he lost his long-running legal battle with the restaurant chain over his religious objections to selling pork products.

A lawyer for Walid Elkhatib said Tuesday that his client is in the process of removing Dunkin’ Donuts signs from his Westchester outlet, but apparently not fast enough for the company.

Dunkin’ Donuts went to federal court in Chicago on March 27 to stop Elkhatib, 59, from using the company’s trademarks and other proprietary materials.

The company’s lawsuit came two weeks after a federal jury found that the chain did not discriminate against Elkhatib for refusing to renew his franchise agreement because he declined to sell breakfast sandwiches with bacon, ham or sausage.

The dietary restrictions of Elkhatib’s Muslim faith forbid him from eating or handling pork. When he decided to go into the restaurant business, his faith was one of the reasons why he invested in Dunkin’ Donuts in 1979. The chain did not introduce breakfast sandwiches until 1984.

For nearly 20 years, Dunkin’ Donuts accommodated his religious beliefs, even providing him signs for his store that said, “No meat products available,” Elkhatib asserted in court documents. But in 2002, the company reversed course and told him it would not renew his franchise agreement if he did not sell its full line of products.

Read more at the Chicago Tribune