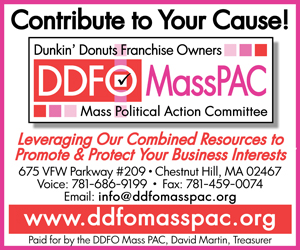 In just eight months, the Dunkin’ Donuts Franchise Owners Massachusetts Political Action Committee (DDFO MassPAC) has already reached its year-one goals and has become the model for other states and even a nationwide PAC. At DDFO MassPAC’s first Annual Meeting on October 13 in Boston’s Beacon Hill, this remarkable progress was acknowledged and celebrated, albeit with an eye on the work still to be done.

“The entire DDFO MassPAC effort has been to distinguish the forest from the trees for state and federal legislators,” said DDIFO Government Relations Director Joe Giannino. “You drive down any road in Massachusetts and you’re bound to see a Dunkin’ Donuts–that’s the forest. The individual franchise owners and operators are the trees. But, as the PAC discovered through its work, the majority of legislators didn’t even see the trees, so to speak. They had no idea that each and every Dunkin’ shop in their local districts is operated by a small business owner, a constituent, and not by the Brand conglomerate. That has made a huge difference in their perspective on certain proposed legislation and in their desire to protect the interests of franchisees.”

DDFO MassPAC Chair Robert Branca echoed and added to Giannino’s assessment. “Over the past year, we achieved the goals we set for educating state and federal legislators and protecting franchisees’ interests,” he said. “We brought our message, our agenda and our specific concerns to their attention. They know who we are now: We franchisees are the actual small business owners behind the Dunkin’ Donuts signs that people have seen for years upon years. We are the ones investing in their local districts every day through our businesses and our community efforts. They understand that it’s our bottom line–not to mention our families and employees–that are put at risk by confusing and even contradictory regulations and laws.”

At the Annual Meeting, DDFO MassPAC Treasurer David Martin delivered a financial report that acknowledged the organization has reached its year-one fundraising goal of $25,000. Martin commented that over 60 franchise owners contributed in an “impressive showing” particularly for a first-year PAC.

Jon Hurst, President of the Retailers Association of Massachusetts (RAM), served as guest speaker. Hurst has a long history of involvement with RAM, a statewide trade association dedicated to promoting and protecting the retail industry through government relations. According to Branca and Giannino, Hurst has been very supportive of DDFO MassPAC and is mindful of the two organizations’ common interests and concerns. In his talk, Hurst asserted that it’s the small business owners, like Dunkin’ Donuts franchisees, who are the true drivers of the Massachusetts economy. He emphasized how critical it is for small business owners to stay involved and make their voices heard on the political front.

“Having Jon Hurst at the meeting signifies the power of establishing collaborative relationships across industries, of the banding together of small business owners,” Giannino said. “His association represents thousands of members affected by the same issues as Dunkin’ Donuts owners. The more we can work together within the political system, the more impact we can have on the system.”

Just one example of the type of work DDFO MassPAC does day-to-day is its efforts related to the Massachusetts tip-pooling statute. The original law on the books contained exceedingly ambiguous language and inherent inequities that led to ridiculous fines and baseless private action lawsuits, even class actions, against individual franchisees. DDFO MassPAC drafted and led through the legislative process a comprehensive amendment to the law. At first, a variety of unions, the Attorney General’s office and the Department of Labor and Workforce Development had a litany of objections. DDFO MassPAC worked with each of these parties to tackle all of the objections, remove the ambiguity and negotiate a bill that everyone could live with. This is the bill that ultimately went to and was passed by the state legislature.

“On the federal level and in every state, legislation can and often does arise that could be financially or operationally crippling to us,” said Branca. “We need to continually be able to back candidates who will advocate for small business owners and particularly Dunkin’ franchisees. We need to put ourselves in a position to make our voices heard clearly and with specificity. No one else is going to do it for us. That’s why, as a franchisee myself, I’ve come to see contributing to the MassPAC as part of the ongoing cost of doing business. Franchise owners in every state need to recognize the importance of having a PAC and need to budget accordingly in order to support it.”

Dunkin’ Donuts franchisees in Connecticut, Illinois and New Jersey have already expressed interest in forming state PACs and are using DDFO MassPAC as a model. In addition, a national committee–DDFO FedPAC–is now in its formative stages with a plan to launch officially in 2011. Longtime multi-unit and multi-state franchisee leader and owner John Motta will head the national PAC and is beginning to pull together a team.

“Many of us have experienced how government is affecting our businesses, and it seems that they want to regulate more and more how we do business. That’s why I feel we must unite as franchisees and establish a federal Political Action Committee so our voices can be heard directly in Washington,” said Motta. “The new federal PAC will specifically tackle issues on a federal level that will affect franchisees throughout the country.”

“Regardless of your level of political tolerance, government has a tremendous impact on small business operations and on your bottom line,” Giannino said. “People either lead, follow or get out of the way. Kudos to DDIFO, Rob, John and all of the involved franchisees for realizing that it’s best to lead.”

To learn more about contributing to DDFO MassPAC click here.