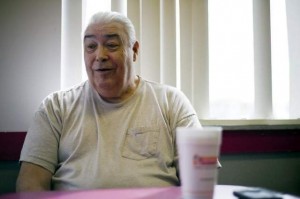 Sara Dorn of the Battle Creek Enquirer writes Tom Winchell said “cheers and tears” have been the reactions of loyal Dunkin’ Donuts patrons when they hear he will close his doors Sept. 22 at 3 p.m. after 37 years as Urbandale’s doughnut man.

Cheers because, “I don’t blame him. I know how fun it is to retire,” said Joyce Blaski from a table where she sat with her husband, Joe, drinking Dunkin’ Donuts beverages in mugs the couple brought from home. Joe Blaski and a group of friends have been meeting daily there for years, sometimes twice a day, to indulge and chat.

While 14-year employee Vickey Ashby cheers Winchell and his wife Karen, who has also worked at the store since the couple bought it as a Dawn Donuts in 1975, for their retirement, the longtime employee is also flooded with tears.

“I left my job twice to take care of family members,” the emotional cashier said with her arm around Tom Winchell. “They held my job there for six months and they’re like family.”

Ashby will also retire when the Winchell’s 20-year contract with Dunkin’ Brands, the franchisor, expires in September. As for the other approximately 10 employees, “most of them are going back to school,” Tom Winchell said. His daughter Julie Winchell, who manages many of the day-to-day operations at the shop, is one of them.

“I grew up around the street and everybody knows me and I know everybody,” Tom Winchell said. “There’s going to be a big void in Urbandale without this shop. This has been an icon here.”

Winchell said the building needs at least $400,000 of remodeling and a drive-through added to meet Dunkin’ Donuts’ requirements for their stores. State law doesn’t allow the 1567 W. Michigan Ave. building to house a drive-through because of its proximity to the street, Tom Winchell said.

Winchell said the building doesn’t have enough space around it to knock it down and build another further from the street.

He does not own the building and it is for sale now.