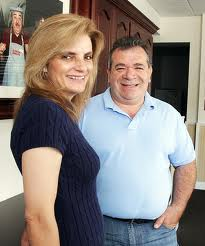 The Gloucester Times reports that Deo Braga, was honored as Gloucester’s Small Business Man of the Year. Deo left Portugal for the United States in 1981 and embarked upon the American Dream.

Starting in the kitchen of a Dunkin’ Donuts in East Boston, the then-20-year-old immigrant quickly baked his way up to position of manager of the Dunkin’ Donuts in Essex, a move which introduced him to Cape Ann, and eventually to Gloucester, where, together with his wife Paula, he would build an entrepreneurial empire estimated today at approximately $20 million and growing.

Now the owner of eight Dunkin’ Donuts franchises throughout Cape Ann, including five in Gloucester, Braga’s portfolio of successes in real estate, commercial and personal ventures are somewhat dwarfed by the fame of what some might call his “flagship venture” — Washington Street’s Azorean Restaurant.   His homage to his homeland, Braga’s Azorean, with its extensive menu of authentic Portugese cuisine, also pays homage to Gloucester’s heritage of fishing fleets manned by Azorean immigrants who, like Braga himself, had crossed the Atlantic in search of the American dream.   The secret of this immigrant’s success story is no secret to anyone who knows Braga.

His formidable work ethic and attention to detail and quality service are evident in everything he does. But the man who virtually transformed Gloucester’s business landscape told the Times in a characteristically down-to-earth interview last summer that “I still work the donuts.”   At last night’s gathering at Gloucester’s Topside Grill, hosted by the Cape Ann Chamber of Commerce, Deo Braga was as down-to-earth as ever in thanking the Chamber for naming him Gloucester’s Small Business Man of the Year.