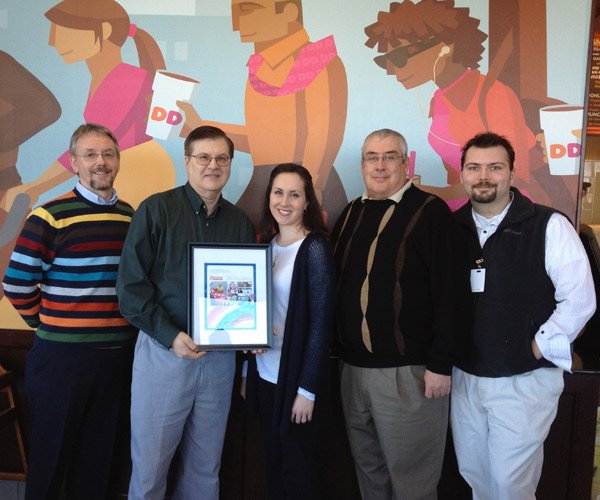 To each of us, it’s just a few cents weighing us down. But since 2009 this Dunkin’ Donuts group has witnessed the impact small change has for the greater good throughout Maine, New Hampshire, and Central New York.

Customers dropped $78,861.01 into collection jars for the Make-A-Wish. So far, 12 children – nine in Central New York and three in New Hampshire and Maine – were granted their wishes, thanks to Dunkin’ Donuts independent franchise owner the Wolak Group.

Make-A-Wish grants wishes to children between ages 2-1/2 and 18 with life-threatening medical conditions.

The “Spare Change” program made these, among many more, wishes possible:

“Although we contribute in Maine, New Hampshire, and New York, all the donations have been targeted in their respective areas and that is very important to us. As a locally owned business owner, we strive to give back to the communities that support us, and Make-A-Wish helps us do that while giving hope, strength and joy to local children with life-threatening medical conditions,” Garrett said.

And Make-A-Wish credits the Wolak Group’s “support and generosity to significantly raise the awareness of our organization and mission in Central New York. The customers have generated incredible financial gains all of which directly support wishes,” said Diane Kuppermann of the Central New York Chapter of Make-A-Wish.

“The Wolak Group’s generosity in donating donuts and coffee to countless special events, including the Tiffany Heitkamp Walk for Wishes, the Ms. Orange Fan Luncheon, and the Syracuse movie premiere press conference for Soul Surfer has greatly enhanced both our brands,” said Kuppermann. “The relationship has also opened doors to new corporate sponsors including the Syracuse Crunch hockey club. Because of The Wolak Group, Make-A-Wish was privileged to be the only charity to participate in the city’s first outdoor hockey game.”

Since 2009, the Spare Change program has gathered more than $330,000 for local charities and foundations in Maine, New Hampshire, and New York State. In addition to Make-A-Wish, the most well-known of these nonprofits include:

Dedicated to protecting and enhancing the business interests of its members

Learn more about DDIFO and its members