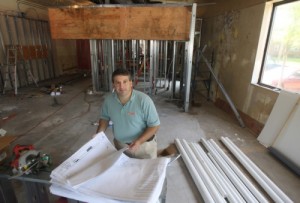 Betty Lin-Fisher of the Akron Beacon Journal the franchise owner for new Dunkin’ Donuts stores in the Akron area and other parts of Northeast Ohio is halfway through his goal of adding 22 locations and says the market is doing well.

“The brand has done a really good job,” said Ken Blum. “Our name is Dunkin’ Donuts, but we’re probably better known for our coffee than for our doughnuts.”

Blum’s multiple franchises give him and his partners the rights to a U-shaped area from Avon to Akron to Aurora, or what Blum calls his “triple A” territory, which does not include the Cleveland suburbs or Canton. Blum said he believes he is the largest independent Dunkin’ Donuts franchisee in Northeast Ohio.

The companies now have 11 locations — the newest store at 3205 Manchester Road in Coventry Township opened a month ago and plans a grand-opening celebration Sept. 15.

Other locations in the franchise are in Medina on Court Street, on Tallmadge Circle, on High Street in Wadsworth, on Center Road in Brunswick and on Pearl Road in Strongsville.