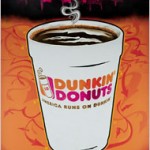 The pink-and-white pastry shops expanded by 9% in the city this year, giving it 77 more stores than No. 2, Subway; Tasti-D-Lites, Pizza Huts are shrinking.

Crains Business New York reports that in a year when consumer-driven businesses helped the New York City economy recover much faster than expected, more national retail chains expanded their presence in the city than reduced their footprints here, according to a report released Tuesday.

Dunkin’ Donuts topped the list of chain retailers in the city for the third straight year, with a 9% jump to 466 locations across the five boroughs. That’s 77 more stores than Subway and 210 more than Starbucks, which came in second and third, respectively, according to the nonprofit Center for an Urban Future.

In the third annual ranking of national chains in the city, cell phone stores exhibited particularly strong growth, with Verizon Wireless growing by 11% to 50 locations, T-Mobile expanding by 22% to 117 stores, Sprint increasing by 38% to 33 shops and Metro PCS quintupling its presence to 35 locations.

Some 280 national retailers in the city operate a total of 6,335 locations, a 4% increase in door-count over 2009. Of those retailers, 39% increased their presence in the city in 2010, 20% reduced their number of stores and 41% remained the same. The increases were seen in each borough, with Brooklyn exhibiting the strongest growth in chain stores, jumping by 5% to 1,325.

“It’s hard to say if the growth is good or bad,” said Jonathan Bowles, director of Center for an Urban Future. “You could argue there are too many chains and that they’ve crowded out independent businesses. But it’s good that national businesses have invested in the city, particularly in a tough time.”

Indeed, food and drink establishments and retail stores accounted for 13,600, or 21%, of the private sector jobs added in the city this year through November, according to an analysis of state Department of Labor data by real estate services firm Eastern Consolidated.

The growth of retail here is being fueled by Wall Street’s surprisingly rapid rebound, a booming tourism industry and a growing number of overseas companies that want to establish a presence in the city, said Richard Hodos, an executive vice president at CB Richard Ellis.

“New York is still New York,” he said. “It’s unlike any other city in the country.”

Dunkin’ Donuts maintained its place at the top of the list even though it is only the fourth largest national retail chain in Manhattan—with 115 stores in the borough—trailing Starbucks, Subway and Duane Reade. But it has the most locations in each of the other four boroughs.