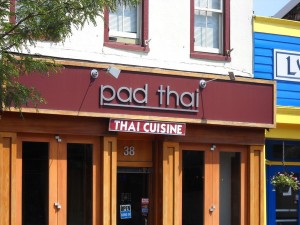 The way has been paved for a Dunkin' Donuts location in the Historic District of Annapolis, but local coffee shop owners fear it will push them out in its wake.

HometownAnnapolis.com reports that a businessman is one step closer to opening a Dunkin’ Donuts store in Annapolis’ uptown district, despite the concerns of the proprietors of two locally owned coffee shops right across the street.

The Planning Commission, a city board of seven citizens, OK’d franchisee Todd Lalumiere’s proposal Thursday night at City Hall. The vote was 5-2, with Chairman David DiQuinzio and Commissioner Robert Waldman voting against.

Some commissioners had concerns about corporate chains encroaching on business districts composed of local, independent merchants. But they didn’t see any legal grounds to not grant the special exception request to operate on Inner West Street.

The location, formerly a Thai restaurant, also was once a McDonald’s restaurant.

Brian Cahalan, owner of the 49 West Coffeehouse and Winebar across the street, said chains in Annapolis’ Historic District “kill the soul of the town.”

“I never see corporations at neighborhood association meetings,” he said at the hearing.

Cafe Ole owner Mohamed Hassan said during the hearing that the city is abandoning local merchants.

Many of the commissioners sympathized with the concerns of the new store’s prospective competitors, and asked the city’s planning staff to research regulations in other jurisdictions that preserve local independent business districts or restrict chain stores.

There is another Dunkin’ Donuts at the far end of West Street, just beyond “Hamburger Row,” the site of numerous fast-food restaurants.