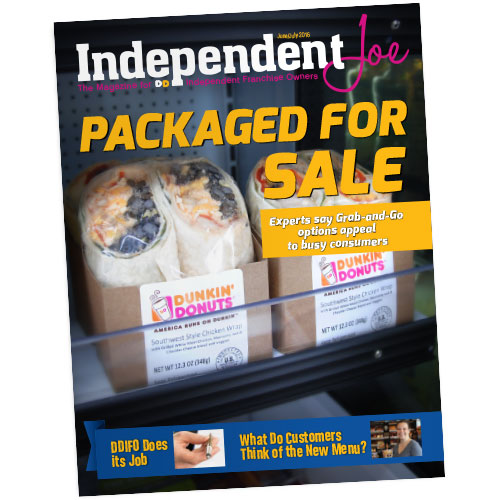 Ever since it started offering deli-like sandwiches to its customers in 2012, Dunkin’ Donuts has been in a constant state of change—searching for the right meat-cheese-and-egg combos to boost breakfast sales and provide all-day companions to its growing roster of beverages. Now, with snacks representing approximately 60 percent of sales, Dunkin’ Brands is trying out new methods to increase food sales and traffic amid a super-competitive quick service restaurant field. Which is why Dunkin’s new “Ready-to-go-Choices” kiosks – currently being tested in several markets – have the industry keeping a close watch.

“When you look at food as a complement to beverages, grab-and-go gives consumers more choices and that is especially appealing to people who are busy,” says John Gordon, principal of Pacific Restaurant Management Consulting Group and DDIFO’s restaurant analyst. “It’s a great way to compete with Starbucks and with convenience stores.”

Dunkin’ doesn’t issue press releases when it tests new concepts. This program received attention after Stephen Anderson, a restaurant analyst with the investment banking firm Maxim, publicized the kiosk he spotted in Connecticut, then confirmed with Dunkin’ Brands that it was part of a test market. Anderson believes kiosks could boost same store sales by one to two percent.

“We believe that morning customers may pick up an additional item, such as a sandwich or salad, for consumption later that day, while afternoon beverage customers can pick up a snack on the run,” Anderson wrote in a note that was published in Nation’s Restaurant News. He also said the kiosks would help with franchisees’ cost structure because operators will have to keep prepared food on hand and the items are made at a central commissary, which keeps costs down.

Lauren Hallow, concept analyst for the restaurant consulting firm Technomic, says grab-and-go choices are a great way for Dunkin’ to compete with Starbucks, which has been adding new products to its refrigerated kiosks – like fruit and cheese plates and sandwich roll-ups – in the hope the chain can increase impulse buys at the point of sale.

“People will buy something they may not ordinarily buy if they see it packaged at the register, instead of waiting for it to be made fresh,” she says. 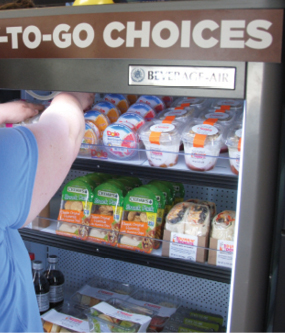 Independent Joe recently visited a test site in a northeast market to ask customers their opinions about grab-and-go options. The kiosk at this urban location was right next to the counter and was stocked with yogurt parfaits, Mandarin orange slices packed in fruit juice, turkey-apple-cranberry wraps, southwest style chicken wraps, hummus snack packs, fruit and cheese snack boxes, green salads with chicken and packages of salami and cheese, in addition to bottled water and soda. According to the franchisee, on the day we visited, the kiosk had been up and running for less than two weeks.

A mixture of people who work and live near the restaurant came through during the morning hours we were there. Overall, people responded positively to the concept and to the choices, though we witnessed only a few making purchases. The franchisee says sales are growing slowly and, thus far, the yogurt parfait is the best seller.

Hallow from Technomic notes more restaurant chains are experimenting with grab-and-go kiosks and operators are learning to find the right mix of products. “Items that complement their current offerings work best,” she says. “Focus is better. You don’t want to add 20 different options. That will overwhelm customers.”

Lauren, a customer who works near the shop we visited said, “I love it. I love how they have the fruit and the sandwiches to go and different choices, the cheese, the crackers, I like it all.”

Anne, who was standing three customers behind Lauren in line, said the choices look great. “Yeah, they look good, but they are expensive.”

Dunkin’ Brands declined our offer to discuss the “Ready-to-go-Choices” kiosks, and franchisees we contacted didn’t want to discuss the program on the record. And, while cost could be an issue for budget-conscious customers, a more direct threat appears to be the perception of freshness. Several of the customers we talked with said they were “concerned about when it was made.”

We asked Margo, who works near the location we visited, if she would consider buying one of the wraps in the case. “Never,” she said, “because I feel like it’s old. I would rather buy something fresh [off-the-menu].

George, who lives nearby, looked into the case and said he liked the look of the turkey apple wraps. “I’ll probably try one of those [sandwiches],” even though he worried a bit whether they would be fresh. “Some of the things [in the kiosk] have preservatives, I’m sure. So I would be concerned most about the sandwiches.”

Gordon, DDIFO’s restaurant analyst, warns if Dunkin’ Brands moves ahead with kiosks in all restaurants, the brand will have to ensure the supply chain it uses to get the products to the store, have great quality assurance and control.” It has potential, but could be fraught with problems,” he says, particularly because of shelf-life considerations. He points out if the waste is 20 percent then the effective cost rises which could be counterproductive.

Because freshness is the key, Hallow says, sandwiches and boxed snacks have to be made that morning and delivered the same day.

“You have to emphasize that these sandwiches haven’t just been sitting there,” she says.

In 2015, Technomic produced a College & University Consumer Trend Report, in which college and university foodservice operators were asked to gauge the impact various menu initiatives had on increasing traffic and sales. The types of initiatives included: indulgent menu items; healthy menu items; and pre-packaged, grab-and-go items. Of those, grab-and-go had the greatest impact. Pre-packaged items scored highest, impacting traffic and sales 72 percent, compared with 55 percent for healthy items and 51 percent for indulgent items.

According to Hallow, “This shows that Dunkin’ could attract more young patrons with grab-and-go fare.”

What’s more, a 2013 study from The NPD Group, a food and beverage research firm, found that every day 28 million Americans eat a “grab-and-go snack,” defined as candy bars, gum, donuts, chips, cookies, ice cream, fresh fruit and bagels. NPD reported young adults – ages 18-24 – are “the most inclined toward the instant gratification these types of snacks offer.” Grab-and-go snacking typically occurs in the car, which makes convenience stores a primary source for such items.

“The sense on the Street is that Dunkin’ Donuts has been hurt by convenience stores,” according to Gordon, who notes “c-stores” are projecting growth of 10 percent in their sales of food items. “If analysts continue to downgrade Dunkin’ stock, the brand may find itself taking more pages out of the c-store manual,” he says.

The general consensus is that convenience stores can’t compete with Dunkin’ Donuts when it comes to fresh, hot coffee, which is still the staple of its sales. But, as the brand continues to find ways to increase same store sales, grab-and-go items have greater appeal.