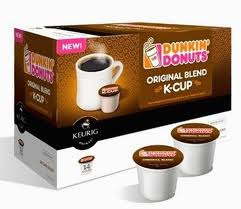 day, beating rival Starbucks Corp. to the market in a fast-growing portion of the coffee business.

The K-Cups can be used in Keurig brewing systems, which have gained popularity in offices and homes. The company that makes them, Green Mountain Coffee Roasters Inc., first announced its partnership with Dunkin’ Donuts in February. Since then, it has also announced agreements with Starbucks Corp. and ConAgra Foods Inc.’s Swiss Miss hot chocolate brand. Starbucks plans to start offering K-Cups in the fall.

The Dunkin’ Donuts K-Cups will sell for about $12 for a pack of 14. They will be available only at Dunkin’ Donuts shops, not at grocery stores or other retailers where Dunkin’ sells bagged coffee.

Scott Hudler, Dunkin’ Donuts’ vice president of brand marketing, said he’s certain that customers will buy the K-Cups even if they are more expensive than Dunkin’s bagged coffee. Customers have been asking for Dunkin’ Donuts K-Cups for at least the last year or two, saying they like the Keurig system because it’s quick, easy to clean up, and allows them to easily brew different flavors, Hudler said.

“We are a premium coffee compared to generic or store-brand coffee,” Hudler added. “(But) even at our pricing we’re offering a value.”

Dunkin’s decision to sell the K-Cups only in its outlets will help drive customers there and perhaps lead them to make additional purchases, Hudler said. It could also keep the brand from becoming too ubiquitous, which is widely believed to be a misstep made by Krispy Kreme Doughnuts Inc. when it started selling its products in gas stations and grocery stores.
BusinessWeek