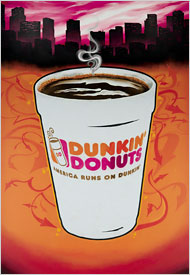 Dunkin’ Donuts, America’s all-day, everyday stop for coffee and baked goods, today unveiled possibly the company’s most prominent advertising yet, a billboard in the heart of New York City’s Times Square. For this billboard, Dunkin’ Donuts has taken a decidedly “fresh” approach, turning to local street artists to create a unique design inspired by urban art of the New York City streets.

To create this billboard, Dunkin’ Donuts enlisted renowned street artist Robb Buono and his team of artists including UrbanMedium, TazRoc and Steven Lopez. Buono developed his style on the streets of New York in the ’80s and early ’90s. He is renowned as the one to call for art direction in hip-hop music video production, and he has worked on hundreds of worldwide productions across the music, feature film and commercial industries. UrbanMedium and TazRoc have collaborated for the past seven years, most notably on design for the RockCorps Organization.

In another fresh move, over the past six weeks while the artists were finalizing the design, Dunkin’ Donuts used its billboard space for a secret teaser campaign that featured no brand identification or imagery, inviting people to visit www.missionfresh.com to submit a guess as to who is behind it. One winner will be randomly selected from everyone who submitted a guess to receive $5,000 and an all-expense paid New York City theater weekend for two. Beginning today, the web site will feature the art used for the Dunkin’ Donuts billboard, as well as artist bios, and a behind-the-scenes video showing how the artists created the billboard.

According to John Costello, Chief Global Customer and Marketing Officer at Dunkin’ Brands, the brand turned the billboard design over to local artists specifically to produce a visually captivating design that would appeal to the millions of people who pass through Times Square each month. “The unveiling of our Times Square billboard gives the brand incredible visibility in one of the most recognizable locations in the world and reinforces Dunkin’ Donuts’ position as the nation’s coffee leader,” he said. “Using this prominent space to create one of the world’s largest pieces of street art is yet one more way Dunkin’ Donuts stands out from other brands.”