No doubt the pandemic has caused stress, financial hardship, and loss across the world. But it’s also brought attention to the good acts people perform in order to help others. Many of those thoughtful deeds took place at Dunkin’ stores across the nation. Whether it has been franchisees, employees or customers performing acts of kindness, these gestures remind us that, in times of crisis, we’re all in this together. Experts say, it is not only important to recognize these gestures, but also to share in the good feelings. 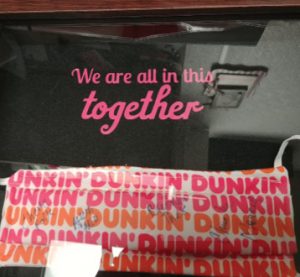 “Positive stories shift our focus and help us look for goodness in the world rather than bracing for more bad. There is so much bad news at the moment, which tends to send us in a spiral of negativity,” says Camille Preston, PhD, a business psychologist.

When people hear positive stories, Preston says, they get a surge of the hormone serotonin, the key hormone that stabilizes mood, feelings of well-being, and happiness. Oxytocin, often referred to as the “cuddle hormone” or “love hormone” because it is released when people snuggle or connect socially, also floods the body.

“When we hear positive stories, it gives you assurance that there are good people out there,” Preston says. From the store and brand perspective, positive stories can make everyone feel like part of a group, an innate need everyone has, she adds.

“What helps people maintain employees is positive relationships and positive emotions, so if employees feel like they accomplished something good when the world feels down, that’s good for [retention],” says Preston. “Knowing that the coffee they served to a nurse can help her do her job better or that helping to make masks for people in need, not only helps employees stay engaged and focused, but more connected too.”

As far as customers go, she says, knowing Dunkin’ is helping during this time helps them feel confident about their purchase and investment.

“Dunkin’ has a reputation of being a hardworking class brand, so when you hear these stories it assures the brand’s reputation. When you go to a store where customers and employees do these things, you feel like you are part of something good. If a customer feels like good people go to Dunkin’ and believe they’re a good person, then it’s reassurance they are buying from the right place,” Preston says.

This month, Independent Joe wanted to highlight several acts of kindness that occurred in Dunkin’ stores. 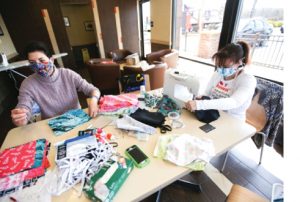 When team member Christine Mercedes told franchisee Jerry Fives she was making facemasks in her kitchen for a local assisted living facility in need, Fives and his wife Sophia felt compelled to help.

In April, the Pennsylvania franchisees offered to buy the material needed to make 60 masks for the facility, and then turned their closed lobby into a makeshift sewing workshop.

“Sophia purchased fabric resembling Dunkin’ colors from a local shop and brought her iron into the store. Christine brought in her sewing machine. For a couple hours each morning over the course of a few weeks, they would make masks. Other employees joined in too,” says Fives.

The masks were delivered to the assisted living facility in Dunkin’ boxes along with some boxes of donuts.

“You can feel helpless during these times and it felt good that we were attempting to make a difference in the lives of those who needed the masks,” Sophia Fives says. 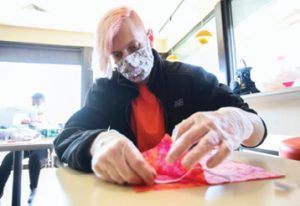 Their efforts caught the attention of local news and Dunkin’ headquarters, which created a commercial highlighting their gesture. While the Fives family wasn’t looking for notoriety, they say it was humbling to get such feedback.

“I made a mask for myself and everywhere I went everyone asked where I got it because they wanted one,” says Sophia.

This prompted the Fives to make masks for employees at their six stores. For these masks they purchased fabric from a marketing partner, who added the Dunkin’ logo and true brand colors.

“This has been a challenging year for everybody and we’ll all remember it. We were just doing our part like a lot of franchisees,” says Jerry Fives. “Our communities mean everything.” 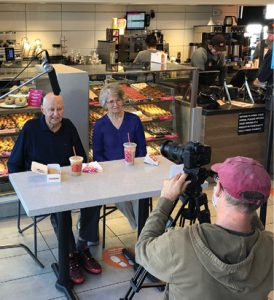 Gil Walker is known as “Grandpa” to employees at the Dunkin’ in Concord, California.

He’s a regular whose daily order consists of coffee and a maple donut. When the pandemic first hit, Walker was worried his favorite Dunkin’ store would lose business and have to adjust hours of operation; therefore, reducing the crew’s hours and income. This prompted Walker to put $280 in an envelope, give it to owner Matt Cobo and ask him to hand it out to his employees.’

“When Grandpa handed us the envelope filled with cash, we all had a hard time processing it. I think we were all in shock. Many of us have been in the restaurant business for 20 plus years and have never experienced anything like that,” Cobo says. “Grandpa has become like family to our entire crew. The team lights up when he pulls into the drive-thru.”

More than the money, Cobo says Walker’s kindness was like a shot of positive energy for the entire crew. “He made us all feel like we’re doing something that’s so much bigger than just serving great coffee and food,” says Cobo. “I think his gesture speaks to the culture that we have created at Dunkin’ and the sense of community that we strongly believe in. We pride ourselves in developing authentic relationships with our guests rooted in trust and loyalty. It’s the only way to build a long-lasting business in our communities.”

Southern California Dunkin’ franchisees, Mike and Abi Stout, are among many in the Dunkin’ system who pulled out the stops for the Class of 2020, when graduation ceremonies were suspended last spring. The Stouts had 20 high school and college graduates working in their restaurants, who couldn’t officially celebrate that most-important life achievement.

The Stouts decided to recruit other store employees to help them throw a makeshift graduation ceremony in the lobby of one of their Dunkin’ shops. The graduates were decorated with caps, tassels, and Hawaiian leis as they received honors.

“Everyone should get to walk across the stage to the sound of graduation music and have an opportunity to toss their caps in the air,” Mike Stout said in a Dunkin’ press release. “Our store employees were so surprised; I still get chills when I think about it. It was certainly a heartfelt moment none of us will forget.” 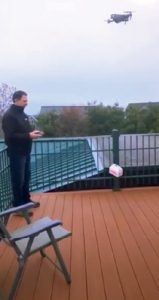 While social distancing, Boston resident Kevin Procopio missed his three grandkids. Since they live only a third of a mile away from him, he found a unique way to deliver them packages—via drone.

Over the course of the pandemic, Procopio began airdropping packages to his family. His sweetest delivery of all was a container of Munchkins he attached to his drone and flew over to the grandkids.

When Louisiana franchisee Erick Falting noticed how the pandemic was significantly impacting Bossier City restaurants and small businesses, as well as local healthcare workers fighting the virus day-in and day-out, he felt inspired to help.

“As the pandemic gained footing, I began to notice medical providers coming into our Dunkin’, tired, hungry, and defeated. I wanted to do something to lift their spirits, while also helping out our local restaurants and fellow small businesses,” Falting said in a Dunkin’ press release. “We’re all in this together and it’s important, now more than ever, for folks to support one another.” 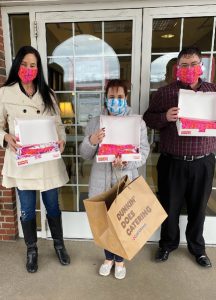 Following through on his words, Falting initiated a campaign to crowdfund donations (along with his own donations) so he could purchase gift cards from local restaurants trying to survive through the pandemic. Once he collected enough donations, he turned to social media to spread the word that anyone in the medical field who visited his Dunkin’ store was welcome to take a gift card as a thank you for their service.

By mid-July, Falting raised over $4,000 in gift cards, which landed in the hands of over 400 local healthcare professionals. His generosity spread wider, too. He donated coffee and food to over a dozen local medical facilities, grocery stores, fire stations, and schools.

Dunkin’ Brands has highlighted many stories featuring acts of kindness on its blog. We salute all the franchisees, employees and customers in the greater Dunkin’ community for their efforts to help others feel connected, appreciated and loved during these difficult times.