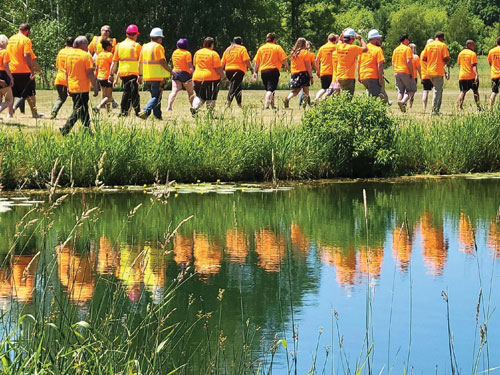 His friends thought he’d be too embarrassed, but Rob Wessel is up for anything that will help him do good and help others.

That’s why they bet Wessel $100 he wouldn’t walk around his neighborhood in his Dunkin’ onesie—a white jumpsuit emblazoned all over with the iconic pink and orange Dunkin’ logo.

Wessel, of Tomah, Wisconsin, is a regional supervisor for 10 Dunkin’ shops in western Wisconsin and Minnesota. He took part in the second annual Dunkin’ JOY Run to raise money for health and hunger relief efforts for children around the United States. Sponsored by the Dunkin’ Joy in Childhood Foundation, the month-long challenge ran from June 1 through June 30 and encouraged Dunkin’ franchise owners and their employees to raise money by walking or running. The walking or running could occur anywhere as long as they tracked their mileage. The participants were free to walk or run in their own neighborhood or anywhere else as long as they tracked their miles, raised money, and got exercise. People who tracked 100 miles of steps during the month will be showcased on a Boston billboard later this year. 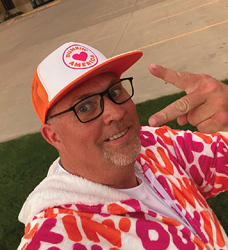 Moving for a Cause

This is the second year the Dunkin’ Joy Foundation has run this event. In 2020, Dunkin’ employees, family and friends collectively moved more than 49,000 miles from 36 states and raised more than $235,000 for the Foundation. That money helped a variety of different organizations around the country recommended by members of the Dunkin’ Brands community.

This year, Wessel joined more than 900 other Dunkin’ JOY Run participants representing more than 400 registered Dunkin’ restaurant team members based in 42 states, according to Victor Carvalho, Dunkin’ franchisee and co-chair of the Dunkin’ Joy in Childhood Foundation.

“Last year, people across America really stepped up to enthusiastically support the Dunkin’ JOY Run, our mission, and our fellow runners,” Foundation Board Co-Chair Karen Raskopf said in a statement. “All this amazing support and funds raised made a big difference to health and hunger relief organizations across the country.”

Recipient organizations that receive grants from the Dunkin’ Joy in Childhood Foundation must go through an application process. All qualifying grantees, which include hundreds of community-based nonprofit organizations, focus on bringing joy to kids battling hunger or illness. They include the Foundation’s own two initiatives, Dogs for Joy, a grant program that helps children’s hospitals to launch or expand service dog programs, and a Teen Prom Program, which provides a prom experience for hospitalized teens. 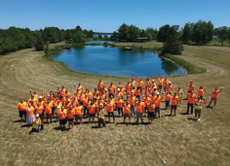 Sarah and Jeremy Alsaker, of Waunakee, Wis., embraced the Dunkin’ JOY Run as a company effort. The Alsakers operate 43 Dunkin’ locations in Michigan, Minnesota and Wisconsin, and expect to be running more than 50 stores by the end of 2021. At press time, they had recruited more than 400 Dunkin’ employees, friends and family members to take part in this year’s event.

The event “is a great way to bring our team together for a fun event that creates a positive outcome for everyone,” Jeremy Alsaker told Independent Joe before the conclusion of the month-long JOY Run. He cited the money they could raise and the benefits to his own team’s health as two important outcomes. “We encouraged anyone who wanted to participate to sign up, and [we] sponsored them by covering the registration fee.”

The team assembled a playlist of songs – submitted by employees – to work out to, including the instrumental synthesizer tune “Sandstorm,” the ‘80s classic “Pump Up the Volume,” and last year’s hit “Dance Monkey”.

More than 260 people on the team had tallied 100 miles or more, though most of them as walkers rather than runners, said Sarah. They also did a group walk on the Alsakers’ farm property located in Wisconsin Dells, which is also the site of the franchise company’s headquarters. 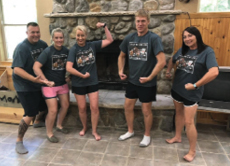 The group is eligible to receive prizes as incentive for team members to raise certain amounts of donations. “We have an online store with Dunkin’ merch such as shirts, polos, aprons, duffle bags and people can earn credit for the store,” Jeremy said. That is in addition to prizes offered by the Foundation, which include water bottles, a running buff, a cooler bag and a long-sleeve zip-up top. The person who raises the most money in the entire event will win a Dunkin’ mini-refrigerator.

“Everyone is excited and I’m getting daily emails from our team about the miles they are achieving, how people are doing Fitbit challenges with each other, and are participating in group chats,” Sarah Alsaker said. “We are all trying to create a ton of excitement through our team newsletter and it’s fun to have a common goal.”

The Alsakers took part as a family, with their daughter Kit, 11, wearing her Fitbit to track miles during her soccer and lacrosse team practices. Their 8-year-old son Weston set an alarm at midnight on the first day of the challenge so the family could “get a few miles in before everyone woke up,” she said.

For the conclusion of the event on June 30, the Alsakers put together a remote celebration of everyone crossing the finish line, virtually,” according to Sarah Alsaker, who told us, “That way, we can have a lot of fun celebrating everyone’s dedication.”

Carvalho tells Independent Joe he is grateful for everyone’s efforts to make the second JOY Run a success. “We appreciate all of the funding and support we receive from runners, walkers and the greater Dunkin’ community – it makes all the difference to children who need it the most,” he says.