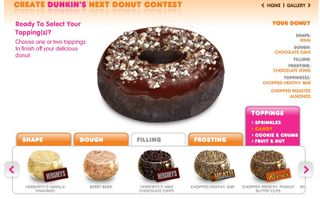 As millions of American workers sit at their desks contemplating a job change, a few of us might think that our real talent lies in doughnut design. Well, there’s only one way to find out, and that’s to enter Dunkin’ Donuts’ “Create Dunkin’s next Donut” contest.

The competition started this week and runs through April 7. It challenges creative doughnut lovers to go online and build their dream doughnut, name it and put it up for competition. I have to admit that I’ve spent some delightful time on the site designing that perfect pastry (right)–all in the name of reporting, of course. It can become engrossing as you choose just the right shape, dough, filling, frosting and accents for the treat. My first creation featured a round chocolate cake base topped with chocolate frosting, roasted almonds and crushed Heath Bar. Now I’m thinking that some red sprinkles would have perked it up considerably.

Anyway, a dozen finalists will be chosen to come to Dunkin headquarters in Canton, Mass for a bake off of the entries and then the public will vote for their favorite finalist beginning May 15. The new doughnut will be unveiled on June 5, which is National Donut Day, of course.

As a promotion during the contest, participating DD’s will offer a doughnut for 49 cents with the purchase of a medium or larger coffee.