According to the Federal Highway Administration (FHA), travel on U.S. roads fell nearly 40 percent in April 2020 compared to the previous April, dropping to the lowest point in 25 years. FHA notes the Northeast region saw the largest drop in miles driven. As COVID-19 upended life’s typical routines – like commuting to work – restaurants and retail stores were forced to adjust or close. Brands had to re-evaluate how they could interact with their customers and keep business moving forward.

For Dunkin’, that meant doubling down on digital and contactless experiences. QSR Magazine reports active enrollment in the Dunkin’ app jumped 110 percent year to year and “Perks transactions as percentage of total sales finished the period a shade over 20 percent, an eye-opening 600 basis-point hike versus last year.” Digital promotions have helped fuel Dunkin’s business, says Stephanie Meltzer-Paul, the brand’s senior vice president of digital marketing. “First, we’ve leaned into compelling digital value during this time with promotions such as Free Donut Fridays which gained a lot of attention. Second, our app experience is the best it’s ever been and so once you order ahead with us once, the repeat rate is high due to the frictionless nature of it,” she told Independent Joe in response to a list of emailed questions. Dunkin’s emphasis on digital marketing and advertising has also helped the brand retain its loyal customers even as their circumstances have changed, she says. “Our digital customer was traditionally a morning, workweek consumer. However, our digital customer is now frequenting varying dayparts more often and is giving us healthy transactions on the weekends.” 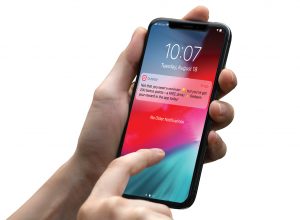 DDIFO restaurant analyst John Gordon, founder and principal of Pacific Management Consulting Group, says Dunkin’s digital marketing efforts have been successful during 2020 for two key reasons. First, the brand invested in the back end of its app, long before people were talking about COVID-19. Second, Dunkin’ wrapped its digital messaging around simple themes, like free donuts, $2 beverages and new products such as Dunkin’ Refreshers.

“The simplicity of the message means something to new customers in a digital environment where there is clutter of noise,” Gordon says, noting Dunkin’ was able to achieve its goal without leaning on traditional radio and TV ads. “A simple message can be efficiently delivered as a digital message. You don’t need a 15 or 30 second ad to do that.”

Meltzer-Paul, a self-described “Jersey girl,” studied accounting at Ithaca College because “I was good with numbers and enjoyed analyzing numbers (still do), but frankly found it boring and marketing just seemed more fun.” She came of age as a brand marketer working for companies like BJ’s Wholesale Club, Starwood Hotels and American Express. “I started my career back in the late ‘90s and we did a lot of traditional mail! Over the years I’ve seen the evolution of email, then push and text notifications, web development, and then app. While the channels are different, at the heart of it the tactics are the same: Speak to consumers how they want to be spoken to and personalize your data and interactions as much as possible,” she says.

Dunkin’ first launched its mobile app in August 2012. At the time, former CEO Nigel Travis called the app, “a clear example of our determination to invest in technologies that help us exceed our guests’ expectations and enable our franchisees to run their restaurants as efficiently and effectively as possible.” Those words, and the company’s continued investments, proved to be a difference-maker this year, when customers increasingly sought mobile ordering and contactless payment for their food and beverage purchases.

Gordon believes Dunkin’s early foray into digital, and its recent hiring of Philip Auerbach, a former SVP at Caesar’s Entertainment, to the role of chief digital and strategy officer, demonstrates the brand’s understanding of “the critical interface of strategy and digital.” He notes how Panera Bread and Starbucks emerged from the Great Recession of 2008 as stronger digital brands, but says Dunkin’ has been outperforming them now.

As an example, Gordon points to the synergy between Dunkin’s beverage-led strategy, behind-the-counter operations and digital messaging. “It solidifies marketing and operations. Working behind the counter is easier, plus there is less cash in the business,” which he says typically translates to higher margins because, “App use is more efficient and always brings in a higher ticket.”

Meltzer-Paul believes the simplicity behind Dunkin’ mobile app is one reason it is popular with guests of all ages. “We have a healthy mix of digital customers across all age ranges and ensuring the easiest digital experience possible is a key goal, so no matter your digital prowess you can take advantage of our tools.”

By automating most of the process, Dunkin’ has been able to limit person-to-person contact and promote a safe and healthy interaction—an important message during these times. Meltzer-Paul says, “In addition to communicating about our safety and health procedures with our digital customers directly via EM, push notification, and the app, we’ve also stressed the benefit of going contactless. You can order, pay, and be on the go without having physical contact with another human.”

But as any Dunkin’ franchisee will tell you, the in-person contact between staff behind the counter and their regular customers is something that nourishes the business and should be retained in any way possible through the pandemic. Meltzer-Paul points out that “while the ordering experience starts in the app, the crew still plays a huge part” in the fulfillment of the order.

“[Dunkin’] is the first brand I’ve ever worked for where the role of the crew member was the most important aspect of that brand. A customer’s entire experience comes down to the food and beverage made with care, and the interaction with the in-store team. And I love that,” she says.

What’s more, there is something personal about choosing an app to occupy the valuable space on a person’s smartphone home-screen. “It says the app is mine,” notes Gordon. “The app says this is what is important to you; it’s part of your family.” And that is familiar territory for Dunkin’.

Even before the coronavirus pandemic, the advertising industry had seen a noticeable shift in the way brands were allocating their advertising budgets. Last October, CNBC reported ad budgets were shifting from TV to digital, even as it predicted ad growth in 2020. The reality, according to a study of European ad trends by Goldman-Sachs, is that digital advertising continues to pick up steam while old-forms of advertising are sputtering. CNBC reported, “Brands are able to measure the impact of online ads more easily than those on TV, and digital ads tend to be cheaper — and it appears the pandemic has had more of an impact on TV ad revenue than digital.”

For Dunkin’, the digital push may also help convert customers in less-mature markets (like California) into loyalists. “We are seeing the biggest increases in digital growth in our less mature markets. They are attaching to the brand and attaching to us digitally, which is helping us forge a better understanding of that customer,” says Meltzer-Paul.

Fred the Baker’s “Time to make the donuts” campaign helped forge a personal connection between Dunkin’ and its customers. Now, the alert coming from a customer’s smartphone not only keeps that personal connection percolating, it also gives the brand a platform to send quick, targeted messages to keep brewing up new business.