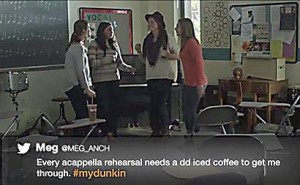 Dunkin’ has been on the receiving end of some favorable press as a result of its recent marketing efforts, including the widely reported first TV commercial filmed entirely from a VINE video.  The press buzz continues with the latest initiative, new TV spots called #MyDunkin that feature Dunkin’ Twitter fans.  In response to the interest and ad press buzz, DD Chief Marketing Officer John Costello is featured in an interview with ADWEEK Magazine.